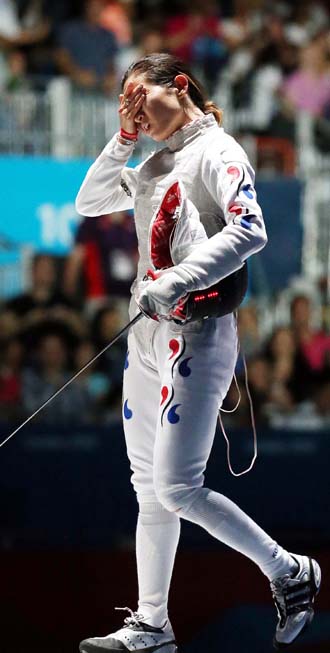 Nam Hyun-hee walks away after a loss to Elisa Di Francisca of Italy at the women’s individual foil semifinals, Saturday. By Joint Photo Corps

Korea’s fencing queen Nam Hyun-hee’s bid to win the gold medal ended bitterly on Saturday as she failed to overcome her Italian opponent in sudden-death overtime.

At the ExCeL Center in London, Nam was hoping for the country’s first-ever gold medal in women’s fencing individual foil event after she settled for a silver medal at the 2008 Beijing Olympics. However this time, the 31-year-old failed to secure a spot on the podium after falling short 11-10 against Elisa Di Francisca in the semifinals and was defeated 13-12 by three-time defending champion Valentina Vezzali in the third place match, both in overtime.

Di Francisca, the 2010 world champion, went on to beat teammate Arianna Errigo 12-11 to win the gold medal, while Vezzali earned a bronze medal to collect her eighth medal in the Olympics.

For Nam, two crucial matches against Italians remind her of a nightmare she suffered four years ago at the Olympics - allowing points at the very last moment and to lose.

During the women’s foil final in Beijing, Nam was leading Vezzali 5-4 in the third set with only one minute remaining. However, she allowed a 5-5 stalemate just 30 seconds later and while most thought it would go into overtime, Nam failed to defend Vezzali’s attack and gave up the lead with only four seconds remaining. She attempted her final attack with two seconds remaining, but failed to score a point and had to settle for the silver.

To wash off the disappointing memory, Nam said before the Olympics that she is ready to claim gold this time after undergoing strict training.

The 2010 Asian Game champion’s quest to snatch the gold medal in the Olympics seemed to be on track as she received No. 1 seed in the event and cruised until the semifinals using her quick feet and solid technique.

Nam, whose is ranked No. 2 in the world, started off with a upbeat victory in the London Games, beating Olga Leleyko of Ukraine 15-9 in the round of 32 before having a tougher time with Hungary’s Aida Mohamed 8-7 in overtime. The Seongnam City Hall fencing team member then crushed Japan’s Kanae Ikehata 15-6 in quarterfinals to reach semifinals.

But from the semis, where three Italians waited, the nightmare of the Beijing Olympics loomed. After exchanging attacks in first two sets, Nam was leading Di Francisca 9-5 in the third set, but she blew a four-point lead and went to sudden death overtime after the final set ended 10-10. In sudden death overtime, both Nam and Di Francisca made an attack, but it was the 29-year-old Italian who was left smiling.

The misfortune didn’t end there.

In the bronze medal match, with only 22 seconds remaining, Nam was leading 12-8 over Vezzali to take third place and was on the verge of revenging her defeat in Beijing.

But Vezzali tied the score at 12-12 with only one second remaining, putting pressure on Nam who had only one victory against the 38-year-old veteran since 2006.

In the sudden-death overtime, both Nam and Vezzali attacked, but it was again the Italian who scored again to wrap up the match.