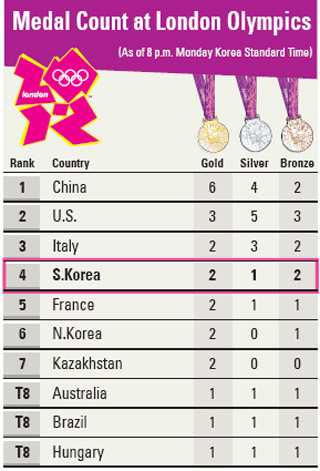 LONDON - Swimmer Michael Phelps won his 17th Olympic medal to take him closer to the all-time mark, but his U.S. freestyle relay team was upstaged by France as records fell in the pool on Sunday’s second day of competition at the London Games.

The latest U.S. basketball Dream Team played to the gallery as they cruised through their opening match against France, with a 98-71 win, but there was an upset for another American gold medal favorite, gymnastics world all-around champion Jordyn Wieber, who failed to qualify for the individual Olympic final.

Overall, China took a commanding early lead in the rankings with 12 medals, six of them gold, ahead of the United States on 11 medals, including three golds.

Meanwhile organizers sought to quell growing frustration with empty seats among the tens of thousands of Britons who finished up ticketless in the pre-Games booking system.

Phelps won his first ever silver after swimming a storming second leg in the 4x100-meter freestyle relay to lift his overall medal tally to 17, just one shy of the all-time record held by Russian gymnast Larisa Latynina.

But a flying anchor leg from France’s Yannick Agnel snatched the gold from the fingertips of Phelps’s teammate and great individual rival Ryan Lochte.

Four years ago in Beijing Phelps won gold in each of the eight events that he swam. In London, after losing his 400-meter individual medley title to Lochte on Saturday, he has already tasted defeat twice in two days.

U.S. swimmer Dana Vollmer ended a lifetime of frustration and battles with her health to win the 100-meter butterfly gold medal in world record time.

Swimming like a woman possessed, Vollmer sliced 0.08 seconds off a record set at the 2009 world championships in Rome before polyurethane bodysuits were banned. Vollmer won a relay gold at Athens in 2004 a year after heart surgery. But she failed to qualify for Beijing in 2008 and did not return to form until she was diagnosed with an egg allergy.