Not all signs for 2nd half are gloomy

Not all signs for 2nd half are gloomy 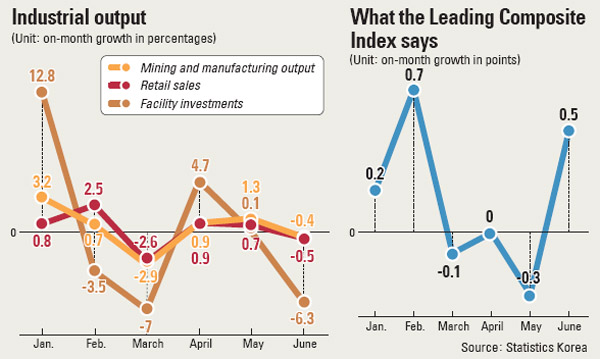 Amid mounting concerns about the world economy, the three pillars of the country’s economy - industrial output, retail sales and facility investments - shrunk last month as expected.

But according to two other important indicators, the prospects for the second half of 2012 might not be as bad as anticipated.

According to Statistics Korea yesterday, production in the mining, manufacturing, gas and electricity industries fell 0.4 percent in June compared to the previous month.

It was the first on-month shrinkage in three months.

In April the output on-month posted 0.9 growth and in May 1.3 percent growth.

“The decline is attributable to a fall in the manufacturing sector, because manufacturers were hit hard by sluggish production of transportation equipment and machinery,” the report said.

The manufacturing sector, which accounts for a large portion of the country’s exports, is plainly affected by contracted global demand.

Retail sales declined 0.5 percent last month compared to May, while investments on facilities including plants plummeted 6.3 percent in the same period.

Domestic demand, a key element of the economic growth, is sagging too.

“Business sentiment has worsened recently due to economic uncertainty at home and abroad,” the report said.

Earlier, the Bank of Korea announced the manufacturers’ Business Sentiment Index for July plunged to 71, the lowest since 2009.

Concerns are mounting whether Korea will reach its target of 3 percent growth this year.

But the coincident composite index, which reflects current business conditions, was unchanged from the previous month. And the leading composite index that forecasts how the economy will fare in the future rose by 0.5 point. Both are compiled by Statistic Korea.

“It is fortunate to see the leading composite index rose but the number can confuse the market,” warned an official at the Ministry of Strategy and Finance.

“Including oil, international prices of commodities plunged in June, and this has helped raise the index for export prices, exceeding the import price index, which is a very positive sign,” Choi said.

He also said there were slight increases in new orders in the construction market in June, quite an achievement since the local construction industry has been in the deep freeze for more than two years.

“Since the leading composite index is calculated based on the industrial indices tallied in June, the three positive signs served to lift the indicator,” Choi said.