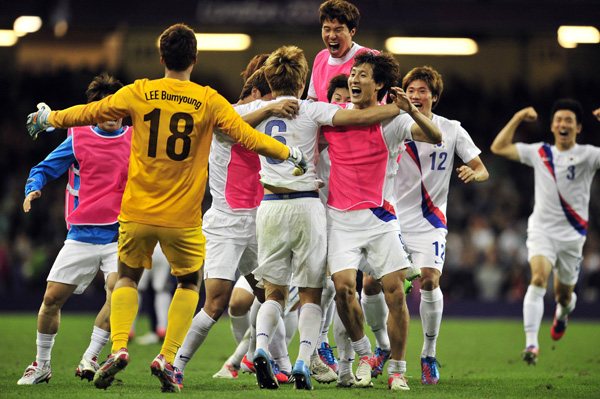 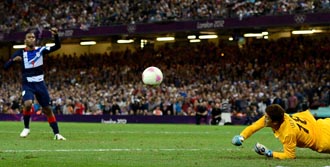 Its semifinal match against Brazil will be held at Old Trafford in Manchester at 3:45 a.m. Wednesday KST.

After a scoreless 30-minute extra time following a 1-1 regular time score, substitute goalkeeper Lee Bum-young saved Great Britain’s fifth penalty kick by Daniel Sturridge, a striker for Chelsea, to the dismay of the home crowd at the 72,000-seat Millennium Stadium in Cardiff, Wales. 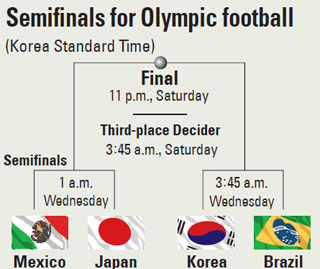 Ji Dong-won, a striker for Sunderland, scored Korea’s first goal in the 29th minute before Aaron Ramsey, an Arsenal midfielder, evened the match with a penalty shot six minutes later. Ramsey’s other penalty shot in the 39th minute was saved by starting goalie Jung Sung-ryong.

“Our players deserve praise for hanging tough throughout the penalty shoot-out despite difficult conditions,” Korea’s Olympic football coach Hong Myung-bo told reporters after the quarterfinal match. “They made it happen getting to the semifinals.”

It is the first time the Korean Olympic football team got past the quarterfinals, which it reached only twice before, including at the 1948 London Olympics and the 2004 Athens Olympics.

Hong, who was captain of the Guus Hiddink squad that advanced to the semifinals of the 2002 FIFA World Cup, has set the bar higher than reaching the semifinals at London. His goal is winning a medal, and will have to win at least one of the two remaining matches including the semifinal match against Brazil.

The winner or loser of the semifinal match, Japan or Mexico, will be the other opponent Korea will face, depending on the result of the Brazil match.

Hong said Brazil, a gold medal favorite, won’t be too big a hurdle to overcome if his players maintain the same edge in the semifinals.

“We had a difficult game today. The next opponent is Brazil, but at the current pace, we are afraid of no one,” Hong said. “We will try getting our condition recovered [before the Brazil match] and put up good play.”

Brazil, the leader of Group C with all three wins, defeated Great Britain 2-0 in a tuneup match. The Samba team boasts a strong offense, scoring 12 goals in four previous matches at London, including a 3-2 win over Honduras in the quarterfinals. Their weak spot is defense.

Ji said he and other Korean players remain confident after the Great Britain match.

“We came to Great Britain to win a medal and the players are very confident that we can accomplish the goal in the remaining two matches,” he said.

Ji, who was the backup for Kim Bo-kyung of Cerezo Osaka in the group competition phase, started in the Great Britain match to capitalize on his experience in the English Premier League.

The tactic worked and a dauntless Ji threatened several times with close shots and headers. The decisive chance came in the 29th minute, when Ki tossed him a non-stop pass from Oh Jae-suk’s long cross and Ki connected with a left-footed mid-range shot in the 29th minute, which got past British defender Micah Richards and goalie Jack Butland into the right corner of the net.

It was a physically demanding match for Korea. Kim Chang-soo, a right back, injured his arm five minutes into the match and was replaced by Oh. Goalie Jung injured his shoulder while attempting to save a free-kick in the 54th minute, replaced not long after by Lee. The other players had to play throughout the 120-minute match.

Hong’s team continued to exhibit the willpower for a win in the penalty shoot-out and Koo, Baek Sung-dong, Hwang Seok-ho and Park Jong-woo all kept their composure and scored their penalty shots, equalizing Great Britain, who scored on shots by Ramsey, Tom Cleverley, Craig Dawson and Ryan Giggs. The fifth British shooter, Sturridge, stuttered before kicking the ball and Lee dived in the right direction to punch it away.

“The Korean lads had, I think, played 18 games unbeaten, so that’s the sort of preparation they’ve had compared to our preparation,” Giggs was quoted as saying by The Associated Press.