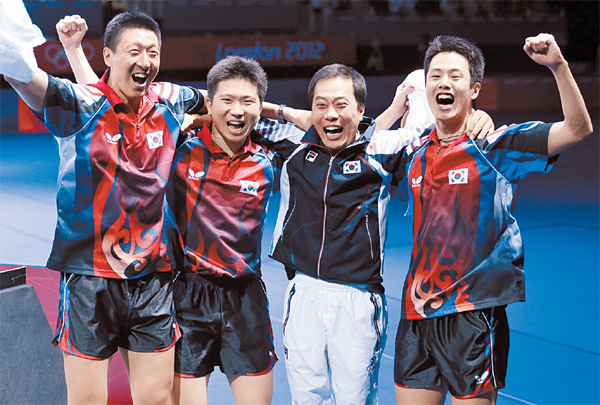 
With a 3-0 sweep over Hong Kong in the men’s team semifinals yesterday, Korean table tennis players are only one win away from the country’s first Olympic gold medal in the sport in eight years.

But the task won’t be easy. China, the world’s table tennis behemoth, stands in the way and is looking to repeat its golden sweep in the sport.

The Korean Olympic table tennis team has raked in three gold, two silver and 12 bronze medals since the 1988 Seoul Olympics, the second most behind China. But its dominance has faded recently as the Chinese have become an unstoppable force.

Korean coach Yoo Nam-kyu hopes to show the world that the Korean players still have it in them to beat China. The finals are set for 11:30 p.m. tonight, KST.

“Statistically speaking, China is certainly ahead of us, but our athletes have a chance to win once every 10 times,” Yoo told reporters after the semifinals. The coach said Korea will go strong from the beginning in the final match against China and try shaking China’s confidence.

All of them are in their 30s, which initially worried their coaches and the Korean public. But, Oh, 35, Ju, 32, and Ryu, 30, assuaged the concerns with strong teamwork in the previous events.

Ryu said age will be their asset, not a vulnerability, going against China. “China is under pressure to win, so we will try finding their weak spots using our experience,” he said. “If our momentum is combined by a strong challenge, I think it is possible that we overcome China.”

Oh said he will retire after the London Olympics and will leave nothing behind in his final match against China.

At the semifinal match held at ExCeL North Arena, Ryu won the first individual competition against Tang Peng 3-2. Joo won the second individual competition against Jiang Tianyi 3-0 and the Ryo-Oh pair beat the Jiang-Leung Chu Yan pair 3-2 in the third double competition. China, composed of Zhang Jike, Wang Hao and Ma Long, beat Germany at the semifinals. The Korean women’s team was swept by China in the team semifinals yesterday.