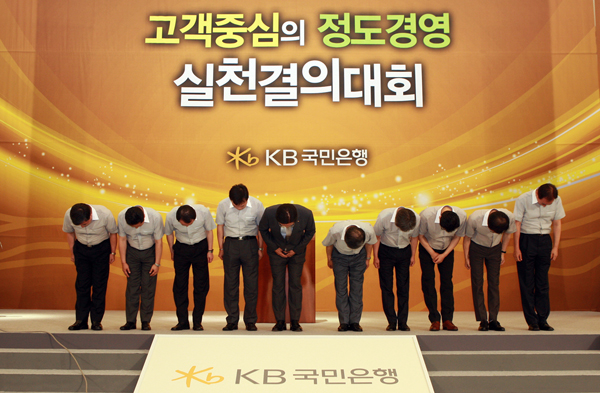 Top managers at KB Kookmin Bank, including President Min Byung-duk, fifth from left, issue an apology and promise to pursue more morally sound leadership while also putting customers first at the bank’s training center in South Chungcheong on Wednesday. Provided by the bank


KB Kookmin Bank President Min Byung-duk was not alone in pledging to make sure management kept track of its moral compass last week.

He was joined by 1,200 top executives from the lender, who also vowed to uphold corporate social responsibility and make sure customers are not misled at a communal oath-swearing gathering at the bank’s training center in Cheonan, South Chungcheong.

KB was the first commercial bank in the country to admit its wrongdoing and promise to make a fresh start by putting customers first after committing a number of missteps. Senior management also announced the bank will step up the aid it provides to small and midsize companies, and ramp up measures to help lower income classes.

Commercial banks have been busy working on image makeovers after their reputations were tarnished recently by numerous allegations of graft and misconduct.

However, the public is not in an entirely forgiving mood and many consider stunts like these as shallow circus acts. Some are already filing legal suits against the lenders.

Negative sentiment about the financial industry dates back to the Occupy Wall Street movement that spread across the globe last year. However, mistrust flared up again when the Fair Trade Commission made a surprise investigation into financial companies’ possible collusion on fixing certificate of deposit rates, a benchmark used to decide a range of rates.

Additionally, a number of skeletons have become creeping out of banks’ once tightly locked closets. Kookmin Bank, the nation’s leading lender, was found to have tampered with loan contracts without notifying customers. Although the bank later admitted its wrongdoing, it blamed the mistake on a number of misguided employees who quickly became scapegoats to shift the focus away from top management.

However, the damage to the bank’s reputation was already done.

Shinhan Bank was the second lender in the country to suffer a major blow when the Board of Audit and Inspection deemed it guilty of engaging in discriminatory loan practices. Shinhan was found to have applied different interest rates depending on the loan applicant’s educational background.

The banking industry was subsequently demonized as being driven by greed and having habitually manipulated customers to turn a profit.

In a bid to regain the public’s trust, other lenders quickly followed Kookmin Bank in announcing their renewed commitment to customers.

Shinhan Bank’s senior executives gathered at its headquarters in central Seoul on Tuesday and pledged to step up their corporate social responsibility programs and pursue more ethical managerial practices.

Suh Jin-won, the bank’s president, apologized for the trouble it has caused customers and society. “We deeply regret our actions, and we plan to strengthen our support for small and midsize companies, as well as to middle- and lower-income clients.”

As well as issuing apologies, the banks are rushing to lower their interest rates.

KB Kookmin and Shinhan banks said they plan to lower the interest-rate ceiling on household and corporate loans by 3 percentage points to take some of the burden off borrowers.

This brings down to 15 percent the maximum interest rate on corporate and household loans offered by KB Kookmin. For Shinhan, it lowers the ceiling to 12 percent for households and 14 percent for businesses.

Meanwhile, Hana shaved 2 percentage points off its highest interest rate on household loans, creating a lower ceiling of 14 percent, while Woori is looking into following suit.

But the Korean public has been burned before and now seems to require a little more convincing that banks now put its best interests at heart.

“Banks are under pressure to lower their rates despite the risk of incurring huge losses as public sentiment toward the industry is not very favorable at present,” said a banking industry employee. “It’s going to take some time before that trust is regained.”

Some bank customers are already taking their grievances to court.

The Financial Consumer Agency is already accepting applications from individuals and companies to join a lawsuit against local banks in response to the recent scandal about loans linked to CD rates, which were found to have been manipulated. The deadline has been set as the end of September. The agency believes lenders paid 1.6 trillion won ($1.4 billion) in unfairly added interest.

Three individuals filed a lawsuit against Hana and Kookmin at a Seoul court demanding compensation of 7 million won each due to the additional payments they made on their interest rates due to the rigging of CD rates.