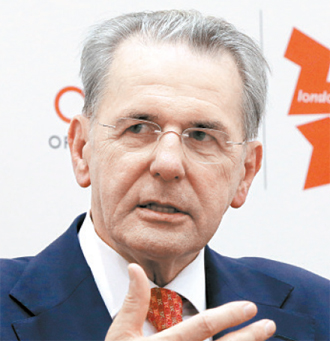 LONDON - President Jacques Rogge of the International Olympic Committee offered his verdict to the question that has been confounding the country for days: Why did national footballer Park Jong-woo have to return home without a bronze medal?

The IOC took issue with how Park ran around the football pitch holding up a “Dokdo is our land” sign as part of a celebration after beating longtime archrival Japan, who claims the islets of Dokdo are their own. The Japanese call them Takeshima. The IOC bans on-field political statements in the Olympic Charter’s Rule 50. But isn’t the penalty too severe?

Rogge made it clear that from the eyes of the IOC, the punishment was not excessive.

“It’s obviously a political statement,” said Rogge, noting that Park wanted to “give a political declaration within the Games site” which was also “covered by the media.”

“If we allow that, then we’ll end up with dangerous demonstrations and retaliations,” he said. Plus, the Olympic Charter is not something new. It’s well-established.

“Athletes are warned before that they cannot do that. Unfortunately, this athlete did it,” he said. The ball is now in the court of FIFA, whose disciplinary hearing will decide the next step that the IOC will take.

Regarding the politicians of both ruling and opposition parties who are forming a rare, united voice in support of Park, Rogge drew a clear line in the sand.

“The rules are absolutely very simple to understand. And rules are there to be respected,” he said, adding that the political statement will “not be tolerated for the harmony of the Games.”

The IOC has been making conservative approaches indeed in terms of the rules against political statements. In 1968, a scandal occurred when African-American sprinters from the United States, Tommie Smith and John Carlos, made a black-glove protest against racism.

As a result, the athletes were expelled, but they kept their medals. Rogge, however, noted a “big difference” between the two cases.

“The Americans in Mexico protested in the Games for a social condition in their country. But here, this young man made a political statement about this territorial issue,” he noted.

And there was another heated controversy regarding Korean fencer Shin A-lam, who staged a sit-in to protest judges’ controversial clock management at the semifinal of the women’s epee event.

About this particular controversy, though, Rogge said, “Issues of judging do not come to my desk, as it is a matter that international federations take care of.”

Regarding Korea’s progress in events like fencing that are not its traditional forte, Rogge congratulated Team Korea and the Korean Olympic Committee for “diversifying its sports outside of archery, short track and taekwondo.”

And he also remained fair by congratulating North Korea for its “strong training and a good knowledge of sports science,” which led to a surprising four gold medals.

The London Games were especially important for Korea’s traditional martial art taekwondo because of concern that it might face formidable rivals like Japan’s karate to replace it in the Olympics in a vote next year at the IOC Session in Argentina.

That was why the World Taekwondo Federation introduced a new system and rules to make it more exciting.

Rogge said he went to the taekwondo competitions and was impressed by the “well-organized” and “very exciting” games.

The London Games happened to be his last Olympics as the head of the IOC. He appeared more hopeful than chagrined by the end of his term since 2001. He described his retirement from the Olympics as “perfectly normal. Otherwise you lose creativity,” he said.

But he ducked the question about who might be the next IOC president, saying, “The one who succeeds me will be a very good president. We have a strong team here.”

But he made sure that he still has a number of responsibilities before he leaves office next year in September. “It’s not that I’m on a holiday,” he said, smiling, “I’ll continue to work for the success of the Games.”

Regarding a call for an increased female presence, Rogge said, “There has been a good improvement,” citing the Executive Board of the IOC embracing the largest female presence ever for the 124th IOC Session in London. But there should be more, he noted.

“There should be more candidates to be elected,” he noted.

How about the reigning Olympic skating champion, Kim Yu-na? Rogge suddenly beamed and said that it’s up to the decision of Kim and the KOC, but if she chooses to run for the IOC athletic commission, the “intelligent Olympic champion” has “quite the prestige.”