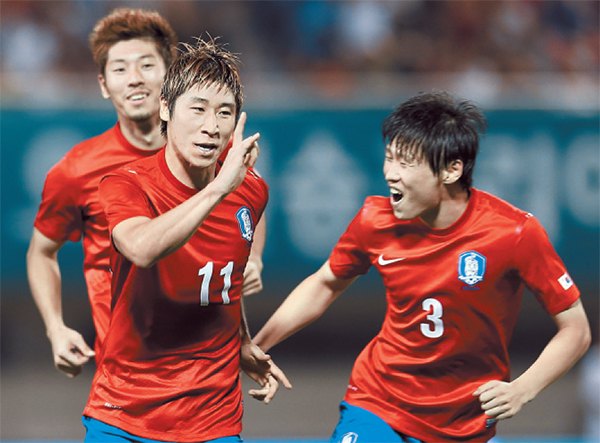 
With the Olympic football squad taking a rest after its bronze-medal run, the national team made up of K-Leaguers carried the torch Wednesday night in a 2-1 victory over Zambia, the winner of the African Cup of Nations.

The game was suspenseful for coach Choi Kang-hee, who is racking his brains over finalizing an 18-man roster for the last round of Asian qualifiers for the 2014 FIFA World Cup. The Taegeuk Warriors will face Uzbekistan on Sept. 11 in its third Group A bout.

In Wednesday’s match at Anyang Sports Complex in Gyeonggi, winger Lee Keun-ho of Ulsan Hyundai FC scored two goals, one in the 16th minute and the second in the 47th, to bring the all-time record against Zambia to two wins and two losses.

Manager Choi was on the hunt for goals, putting two strikers, Lee Dong-gook of Jeonbuk Hyundai Motors and 196-centimeter-tall (six-foot-four) striker Kim Shin-wook of Ulsan Hyundai FC, at the top of the pitch.

He also started Lee-Keun-ho and Daejeon Citizens FC’s midfielder Kim Hyeong-bum, who was selected to play for the team for the first time since 2008, on the wings.

The Taegeuk Warriors struck first with the left winger’s header finding the back of the net in the 16th off a free-kick. With the Zambian defense focusing on boxing out the six-foot-four Kim, Lee was able to move freely and landed a header in the clear.

Zambia showed its resiliency, equalizing in the 28th with a right-footed strike by Emmanuel Mayuka, the MVP of the African Cup of Nations. A confused back line saw the striker put in a sloppy goal.

But Korea’s Lee was the difference-maker. After a cheeky heel pass, the winger’s left-footed strike from mid-range curved past the Zambian keeper to put the Taegeuk Warriors back on top.

“I’m pleased that we were able to find some new talents in this game,” coach Choi told reporters after the game. “We now are able to face Uzbekistan on Sept. 11 with more options.”

Wednesday’s match assured the competitiveness and talent of the K-League. Although players in international leagues such as Ki Sung-yueng of Celtic FC and Park Chu-young of Arsenal weren’t included, the 18 K-Leaguers stuck together and kept Korea’s football mania alive.

Choi instead filled the roster with new names such as Jeong In-hwan of Incheon United FC, Goh Yo-han of FC Seoul and Daejeon midfielder Kim Hyeong-bum to test their competitiveness in the international-level matches.

The experiment was successful. The Daejeon midfielder made a strong appearance as a “kick specialist” by assisting Lee’s header in the first half on the free kick and also delivered sharp crosses to strikers, who constantly threatened defenders inside the box.

Kim took charge of all set pieces in the first half.

He was also the driving force behind the Jeonbuk Motors’ championship run in the AFC Champions League in 2006. He was selected to play for the national team in 2008 during the 2010 South Africa qualifiers by manager Huh Jung-moo.