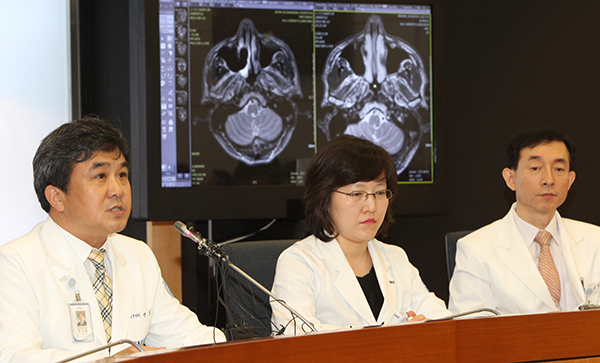 Doctors from Seoul National University Bundang Hospital hold a press conference yesterday to make public the medical checkup of Kim Young-hwan, who claimed he was tortured by Chinese security officials through electric shock and sleep deprivation. The doctors said that Kim appears to be suffering from mental illness.

“We diagnosed him with post-traumatic stress disorder (PTSD), which means that, and the cause is, based on his testimony, assumed to be the physical and mental suffering he experienced while detained in China,” Jeon Sang-hun, a surgeon at the hospital, told reporters. However, the doctors said that they couldn’t find traces of torture on Kim’s face and body. But they added that those traces could have disappeared as time went by. The 49-year-old Kim went through a two-day-long thorough medical checkup on Monday and Tuesday, including: blood test, visual inspection, positron emission tomography, magnetic resonance imaging and 3-D computerized tomography. [YONHAP]