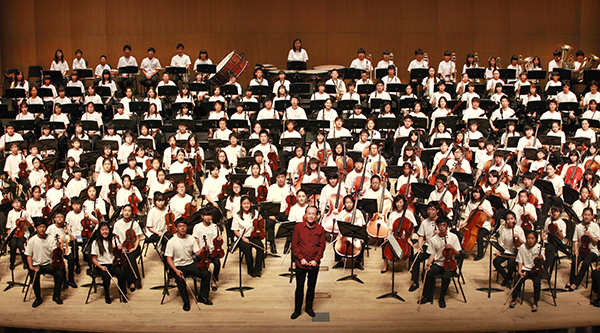 Maestro Gum Nanse and the members of the Korea Young Dream Orchestra pose at the Sejong Center for the Performing Arts on Monday before their concert. The orchestra is made up of children from rural areas and multicultural and low-income families. By Park Sang-moon


A few members of the orchestra, made up of elementary to high school students, abruptly stopped playing Beethoven’s “Symphony No. 5 in C minor Op. 67” and stepped down from the stage at 9 p.m. on Monday at the Sejong Center for the Performing Arts.

The rest of the orchestra continued to play. The audience should have been shocked but instead, with a smile on their face, they clapped for the performance.

He was pleased with the children’s passion for music, so he allowed the children to only play the first part. Although the members didn’t practice the entire symphony, they still wanted to take part in playing the music.

As the concert shows, this orchestra is unique.

The Korea Young Dream Orchestra (KYDO), which was established by the Hope Foundation for Rural Community, is made up of children from rural areas as well as multicultural and low-income families. From 20 orchestras around the country, 10 students from each were selected to be members of KYDO.

Though they face difficulty in learning to play an instrument, the children never gave up hope and passion for music and finally took the stage. They fulfilled their dream of performing on stage shoulder-to-shoulder with professionals.

Son Jang-dal, a 15-year-old violist, learned to play the instrument from an orphanage. He said, “I joined the orchestra along with three of my friends from the orphanage. I am not good at playing viola and sometimes I don’t understand musical terms, but I practiced my best to play on the stage.”

His passion for music was strong. “The students from my orphanage study from 8 to 10 p.m. but I play instruments instead,” he said. “I think my participation in the concert is the reward for all my hard work.”

Some children receive financial aid from the Korea Racing Authority for lessons and instruments through the foundation. Han Jong-ho, a 16-year-old drummer, was able to continue playing the instrument with the aid.

“I started playing drums in fourth grade, but after I graduated from elementary school, I stopped playing,” he said. “But many of my teachers, including the conductor and the director of my band, encouraged me to keep drumming.”

He decided to major in music. “I planned on becoming a salesman but I changed my mind,” he said. “I enjoy drumming and I think I have talent.”

Despite holding the concert for the first time, it was a big success. All the tickets sold out and everyone at the concert enjoyed the performance, shouting “Encore!” at the end.

Maestro Gum Nanse showed his fondness for children through donating his talents.

“From the orchestra, I was able to look back on my life. It was as if I was looking at my appearance from behind a mirror,” he said.

“I chose ‘The Sound of Music’ in particular for the children to meet their standards and Beethoven’s ‘Symphony No.5 in C minor Op.67’ to give them an opportunity to play all four movements on their dream stage,” he said.

When the orchestra played Korea’s national anthem as an encore, all of the audience and the members of the orchestra stood and sang along.

The executive director of cultural service from the Hope Foundation for Rural Community, Rhee Jin-bae, gave hope to children in the KYDO in its establishment.

“Instead of fostering soloists, KYDO focuses on building the self-esteem of the youths,” he explained. “Children who have difficulty in learning to play an instrument will be able to build their hopes and dreams.”