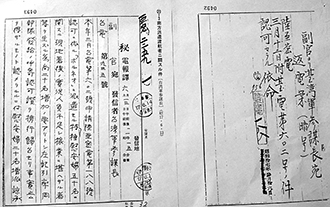 Kim Mun-gil, a 67-year-old honorary professor at Pusan University of Foreign Studies, revealed a duplicate document to the public that he obtained in an archive room of the Japanese Defense Ministry.

The document, titled “Confidential No. 118,” is a letter sent from a Japanese adjutant to a Taiwanese chief of staff of the Japanese army on June 13, 1942, a year after Japan started the so-called “Greater East Asia War” with the goal of dominating the entire Asia-Pacific region and which dispatched many Japanese soldiers to Asian countries, including Taiwan.

“We confirmed that the 50 special comfort women, who are supposed to be sent to the field army, to a place called ‘Borneo,’ have arrived in Taiwan, and we will send 20 more,” the document said.

So far, the Japanese government denied allegations that the Japanese army forced Korean women to offer sexual services during World War II when Korea was under its imperial control.

The document clarified the reason why they were sending 20 more sexual slaves. “We mobilized 20 more comfort women and sent them, because we received a request that they still need more [comfort women] even though the 50 women for the Japanese army have arrived in Taiwan.”

“If you need these kinds of things [comfort women] from now on, deal with the matter like this,” the document said, implying that the Korean comfort women could have been sent all over the Asia.

Kim, who currently chairs a local institute of Japanese culture, has made efforts to figure out the truth of many controversies surrounding Korea and Japan, including territorial disputes.

“In May, I stayed in Japan for a month and thoroughly searched for evidence of comfort women at Japan’s National Assembly Library and the Japanese Defense Ministry,” Kim told the JoongAng Ilbo. “Finally, I found the confidential document in a book of historical records of the defense ministry.”

“It’s really difficult to enter the archive room of the defense ministry. However, I could obtain the entrance card because of my connection with local Japanese historians whom I have participated with in some history projects together.”

He copied the document in the archive room, Kim said. He never suspected the authenticity of the document.

“The document was stored in the archive and had a serial number,” he said. “It was also stamped.”

Statistically, the number of sexual slaves serving the Japanese army was around 400,000 at maximum and Korean women made up roughly 200,000 of them, historians say.