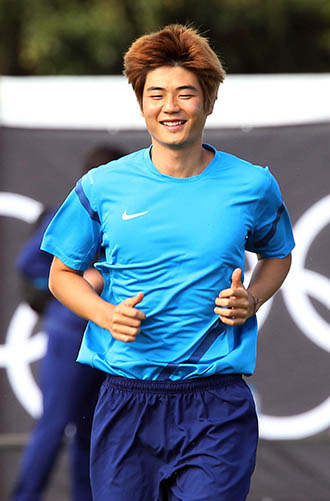 Ki Sung-yueng of Celtic is poised to become the 10th Korean to join an English Premier League club after his Scottish club gave the green light for his transfer to Swansea City.

Huw Jenkins, chairman of the Wales-based EPL club, said Monday his club and Celtic have agreed on a fee for the 23-year-old Korean midfielder’s transfer. The fee is reported to be ￡5 million to ￡6 million ($7.8 million to $9.4 million), plus add-ons. “We are currently holding discussions with the player and agent over personal terms,” Jenkins told Scottish broadcaster STV.

Ki’s possible move was reported Sunday by Celtic News Now, which said Ki would transfer to Swansea City “within the next two days.”

Ki, who helped Celtic win the Scottish Premier League last season with seven goals, has been a subject of transfer rumors for months, even though he has one and a half years left on his four-year contract.

Interest in him intensified during and after the London Olympics, where South Korea won a bronze medal that gives Ki an exemption from mandatory military service. Clubs including Arsenal, Liverpool, Queens Park Rangers, Fulham and Spanish side Atletico Madrid emerged as possible destinations.

While participating in a ceremony in Gwangju yesterday to welcome home London Olympic medalists from the southwestern city, Ki did not confirm his move to Swansea. Celtic was scheduled to play Helsingborg in Sweden in the first leg of their Champions League playoff duel yesterday night, but Ki did not join the team.

Ki’s agent was quoted yesterday by Ilgan Sports, an affiliate of The JoongAng Ilbo, as saying talks were still under way about details of the deal.

Ki said on an SBS program Monday that a team made an offer to him before the Olympics. Korean media outlets speculated that team was the Queens Park Rangers, a west London side that recently acquired Korean midfielder Park Ji-sung from Manchester United. At the time, Ilgan Sports reported that the deal with QPR was “nearly complete.”

However, Ki said Monday he decided to make no decision until after the Olympics. “At the Olympics, scouts from many European clubs come to watch,” Ki said. “I thought that if I performed well, I could get an offer from a better club. It was a gamble to have an adventure.”

The gamble paid off as Ki was on the field for all of the Korean team’s six games and had the winning penalty kick as the young Taegeuk Warriors eliminated Great Britain, 5-4.

Ki’s agent said that Ki likes Swansea’s pass-focused offensive tactics, which were on display in its 5-0 win against the Queens Park Rangers in the season opener on Saturday.

“The match against QPR has influenced Ki,” the agent told Ilgan Sports. “Ki Sung-yueng was enthralled by Swansea’s football style that is focused on short passes.”