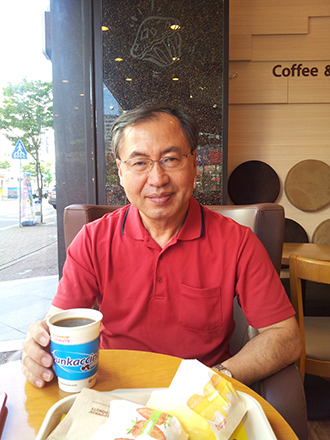 Prof. Choi Byeong-hyun, 62, has completed the first English translation of the “The Annals of the Joseon Dynasty,” a treasured official record. “In an era of globalization, a non-globalized heritage is a dead heritage,” he says. Provided by Honam University

Choi Byeong-hyun, 62, a professor in the department of English language and literature at Honam University, has completed an English translation of the first 15 books from “The Annals of the Joseon Dynasty.” The books are records from the reign of King Taejo, the founder and first king of the Joseon Dynasty.

The books are unprecedented as they represent the first English translation of official records from the Joseon period.

The English translations consist of 1,200 pages and about 400,000 words, including annotations. Choi worked for two years without vacations or holidays to complete the project.

Kim Byung-kook, a former director of Korea Foundation and current chancellor of Korea National Diplomatic Academy, encouraged Choi to start the translation. The effort also received support from Louis Lancaster, a professor of Buddhology at the University of California, Berkeley, who lined up a publisher.

“The Annals of the Joseon Dynasty” is a precious cultural heritage that was designated as a part of Unesco’s Memory of the World Program in 1997.

“Even Koreans find it easier to understand in English than in archaic Korean,” says Choi. “In an era of globalization, a non-globalized heritage is a dead heritage.”

“More than 100,000 Korean students are studying abroad these days. The globalization of Korean cultural heritage will serve as a lever to raise the status of Korean humanities studies.”

Choi is known for his translations of Korean classics. His translation of “The Book of Corrections,” No. 132 National Treasure of Korea, in 2011 and “Admonitions in Governing the People” in 2010, originally written by Jung Yak-yong, are used as texts in the world’s most prestigious universities.

There was even a thesis based on Choi’s translation of “Admonitions in Governing the People” by a student at Columbia University.

An Amazon book review praised “The Book of Corrections” as “a classic that outshines Winston Churchill’s ‘The Second World War,’” and Tasan Cultural Awards recognized “Admonitions in Governing the People.”

Choi first realized the need to translate classics in 1998, while teaching Koreanology at the University of Maryland.

“Right after the IMF crisis, I keenly felt the need to listen to the wise words of our ancestors. ‘How did this happen?’ and ‘Why does history repeat itself?’?” he says.

“These were the questions I wanted to answer by my work when I started the translation of ‘The Book of Corrections.’”

After completing his translation of “The Annals of the Joseon Dynasty,” Choi tried to emulate the spirit of the ancestors who created “The Tripitaka Koreana,” a complete collection of Buddhist scriptures carved on more than 80,000 blocks of wood.

“Even through times of war, our ancestors completed such great works over a period of 15 years,” he says.

Choi hopes future generations will take that spirit and complete the translation of the annals of entire Joseon Dynasty.

China’s “Seven Military Classics,” “Four Books” and “Three Classics” had been known to the outside world long before James Legge, a missionary, translated them in the late 19th century, he says.

“Korean classics didn’t have such a chance until today; the globalization of Korean classics has just begun,” says Choi. “I strongly believe this will bring a new current of the Korean Wave in global society.”

The translation of “The Annals of the Joseon Dynasty” will be posted on the Web sites of the Korea Foundation and the National Institute of Korean History early next year.