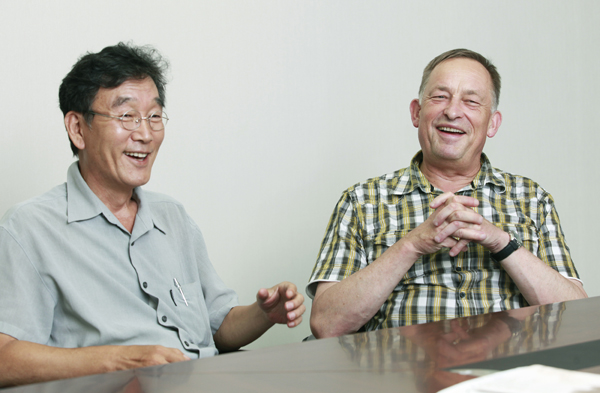 Lithuanian poet Kornelijus Platelis, right, and Korean novelist Hailji speak of their 13-year friendship on Aug. 15, in central Seoul, after a trip to the Yeosu Expo’s Lithuania Pavilion. By Park Sang-moon


An award-winning Lithuanian poet shared his 13 years of friendship with a Korean novelist after attending literary events throughout Korea and recalled darker times in Lithuanian literature.

“The censorship and propaganda-generating in North Korea is similar to that in Lithuania, but to a lesser degree than it was in Lithuania,” said Lithuanian poet Kornelijus Platelis, 61, who was a liberation activist during the Soviet regime and who faced censorship in the 1980s.

Platelis, the former minister of education and science from 1998-2000 and Lithuania’s poet laureate in 1996, took a three-week tour of Korea, which included a literary event at the Yeosu Expo in South Jeolla. He sat for an interview with the Korea JoongAng Daily at its headquarters in central Seoul on Aug. 15, Korea’s Liberation Day.

Platelis presented his poetry at a gathering of Lithuanian writers to an international audience at the Lithuanian Pavillion at the Yeosu Expo in South Jeolla, which wrapped up its 93-day run earlier this month on Aug. 12. Platelis served as the commissioner general of the first Lithuanian pavilion at the 1992 expo in Seville, Spain.

He also served as deputy minister of culture and education from 1991-1993, after Lithuania declared independence from the Soviet Union in 1990.

The meeting with Lithuanian writers was attended by Hailji, the 57-year-old Korean novelist, who has written extensively about Lithuania, giving it much praise. Hailji also presented his 2009 book “The Uzupis Republic,” which is set in Uzupis, a district in Lithuania’s capital which means “on the other side of the river” in Lithuanian. The book is in the process of being made into a movie, which Hailji hopes to film on location.

Hailji rose to fame in 1990 with his debut novel, “The Road to the Racetrack,” which was made into a film the following year.

The two met 13 years ago when Hailji first visited Lithuania, and the Korean novelist states that he has stayed “at his good friend” Platelis’ home in his three subsequent visits - once even making kimchi there - and that it was time to “return the favor.”

Both of them finish each other’s sentences.

The exposure that Lithuanians have to Korean literary works is mostly limited to some anthologies of translated Korean folk tales, admitted Platelis.

“But ten years ago, he introduced seven of my poems in his paper,” said Hailji. The poems were translated by Platelis from English to Lithuanian, from Hailji’s collection of Enlish poems, and published in a weekly culture magazine in Lithuania.

Platelis said that in a literary gathering, “one young Korean poet said after reading my poems, he said he cannot recognize that they are from Lithuania.

“The best poem is when mind, understanding, emotions and senses come together. What it’s about is not so important,” he said.

Platelis rose to literary recognition during a dark and turbulent time in Lithuania in the midst of the Soviet regime, where artists faced harsh censorship.

“I worked as a building engineer for 12 years and all that time, I studied literature by myself. I’m self-educated,” he said.

He published three books over that 12-year span, which were so widely recognized that he eventually gave up architecture in 1988, toward the end of the Soviet regime in Lithuania.

“At that time the style of poetry was dark and sophisticated,” said Platelis. “Poetry was the freest art, the freest way of expression because it would hide with metaphors and metonyms.”

Living in a small town in southern Lithuania, he created a liberation movement group in the 1980s and set about printing newspapers, but he was eventually thrust into leadership.

He recalled protesting, “We’re artists, we don’t want to be politicians. But people were scared and we were not employed anywhere. Those people who were employed anywhere would be released from their jobs [if caught protesting].”

Right after World War II, censorship was especially tough, and he said hundreds of thousands of people were deported to Siberia, and those were “difficult times to be a writer.”

There were at least three layers of censorship. First were the editors. “They were your friends, you could talk to them.” Then came directors and editors-in-chief who controlled what they could and could not publish. The third layer was the special censorship office.

“If they find something in your work, that is bad. It means you could be deported to Siberia or not published anymore,” he said.

A selection of Platelis’ poems translated into Korean was published in the 2012 fall anthology of “The Poet’s World,” which he presented at a literary event hosted by the Seoul Foundation for Arts & Culture on Aug. 16.