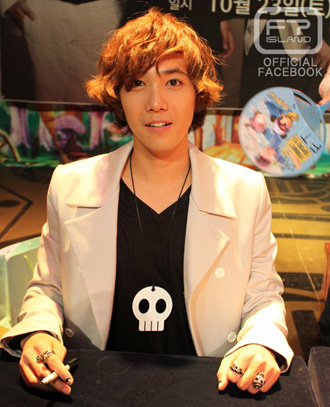 FT Island’s frontman Lee Hong-gi has been named the host of popular K-pop show “M Countdown!” He is set to make his debut on Thursday.

“Lee Hong-gi will take the place of the current host Tony [Ahn],” a spokesperson from Mnet said on Monday.

“Lee is fluent in Japanese and has a large following overseas, which means that he is more than capable of acting as host.”

Representatives of the global show, which is watched by K-pop fans worldwide, said that the singer’s appeal abroad was what made them pick Lee as the next host.

Lee is also soon to star in a film tentatively titled “Our Heaven.” The flick is about a superstar who is sent to a hospice to volunteer. While there, the spoiled celebrity character played by Lee has an epiphany about the meaning of life.

The film will go into production from September and will be released in Korea and Japan early next year.

Although this will be Lee’s first major movie role, he has starred in a number of dramas.