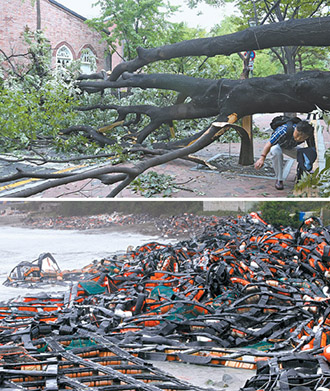 Top: A tree fell on a road in Jung District, central Seoul, as Typhoon Bolaven passed the capital yesterday along the west coast. The 15th typhoon of the season prompted the Korea Meteorological Administration to issue typhoon warnings across the country, including in Seoul. [YONHAP] Above: Typhoon Bolaven destroyed farms for abalone in waters off Wando County, South Jeolla, as the area was directly hit by the storm when it was in a strong state early yesterday. Debris from the farms floated down to a dock. [NEWSIS]

Seven Koreans died in storm-related deaths, along with five Chinese fishermen on a boat that went aground off Jeju Island early yesterday.

But the extent of damage reported yesterday fell short of worries.

Bolaven, named after a highland region in Laos, was thought to be the most-powerful typhoon in a decade and was compared to Typhoon Rusa, which battered the country in 2002 and killed more than 200 people.

“Less than expected rainfall in the central regions was why there wasn’t much property loss or casualties,” said Lee Hyun-gyu, a meteorologist at the Korea Meteorological Administration.

“The country’s southern region saw both heavy rain and winds earlier in the day, causing more damage than in other areas.”

Typhoon Bolaven dropped over 300 millimeters (11.8 inches) of rain on Jeju Island and 200 millimeters on the southern regions. The maximum wind speed, 184 kilometers per hour (114 miles per hour), was recorded at 6:10 a.m. yesterday.

A 48-year-old apartment maintenance worker died in Wanju County, North Jeolla, around 11:10 a.m. yesterday as he was pinned under a shipping container used as a makeshift guardhouse pushed over by gale-force winds.

An 89-year-old woman was killed when her house collapsed after the steeple of a church, including the bell, dropped onto it around 1 p.m. yesterday in Gwangju.

A falling tree claimed the life of a 50-year-old truck driver surnamed Bum, who was clearing tree branches from a road around 10:20 a.m. yesterday in Imsil County, South Jeolla.

There were seven deaths reported as of 5 p.m. yesterday.

A total of 72 people in 30 households lost their homes to the typhoon by yesterday afternoon, the state-run emergency center reported.

A number of measures were carried out by authorities yesterday to prepare for the storm.

A total of 40 incoming and 34 departing international flights were canceled as of 1 p.m. at Incheon International Airport yesterday due to the approaching typhoon.

The state-run weather agency placed major cities, including Seoul, under typhoon warnings yesterday as the typhoon was on its way up along the west coast.

The government also ordered the evacuation of residents from areas deemed prone to landslides that were expected to be hit with more than 200 millimeters of rain. As of 1 p.m. yesterday, over 1,000 people were taken to safer places across the country.

A large merchant vessel carrying 45,000 tons of coal was cut in half after being tossed by stormy waters off Sacheon, South Gyeongsang, at 10:15 a.m. yesterday.

The 77,000-ton vessel was anchored in a nearby harbor but was pushed to the shoreline due to the heavy winds and high waves. No casualties or leakage of coal into the water were reported.

Another typhoon is poised to come toward the Korean Peninsula later this week. Typhoon Tembin, meaning Libra in Japanese, is expected to enter the Yellow Sea this Friday after passing west of Jeju Island. Typhoon Tembin is forecast to pass 220 kilometers southwest of Seoul at around noon on Friday with a maximum wind speed of 97 kilometers per hour, much weaker than Typhoon Bolaven. “Though it is smaller in scale than Bolaven, precautionary measures are needed,” the weather agency said.