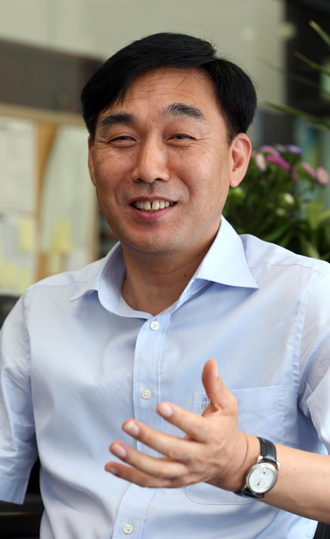 Polio victim Kim Hyun-duk says that rejections by companies when applying for jobs after college in the 1980s led him to succeed in his own business and be a volunteer.

“I didn’t really think that I was disabled until I graduated from college,” says Kim. “I was able to do anything except run, but no company would hire me.”

After he was rejected by more than 10 companies, his family suggested he should run his own business instead of trying to persuade others to hire him.

That’s when he found his passion in life, printing and volunteering, after graduating from law school at Chungnam National University.

“I wanted to break this poor treatment the disabled received in the society,” he says.

He then decided that he wanted to help others with disabilities to show that the disabled can also be productive workers and members of society.

A couple of acquaintances who are disabled agreed to provide transportation for participants in the Paralympic Games in 1988 in Seoul, just a year after he opened a stationery store in Ansan, Gyeonggi.

“Among the disabled who had cars, we agreed that we wanted to give, rather than receive, help,” said Kim.

A volunteer group named Gomduri Car Volunteer Group was established and later became Gomduri Volunteer Group. The group later also invited others to give rides to disabled people without cars to hospitals and elsewhere.

Recently, the group expanded its service territory to contribute their talent to agricultural towns where there are not enough young laborers. Kim said the service has become diversified as more disabled people now own cars and call taxis for the disabled are widely available.

“As we do less transportation service, we have developed to provide hands to benefit each region at the 16 different branches,” Kim says.

“We go to farming and fishing towns and cut hair for farmers and fishermen and that’s how we do volunteer service recently.”

He has served as president of the group for two years and says the group now has about 4,000 participants who are offering their hands to people in need. The group still offers transportation whenever there is a large-scale sports event for the disabled.

He first opened a small stationery store with copying machines in 1987 in front of a college campus in Ansan, Gyeonggi. Just like he recruited more people to participate in volunteer work, he recruited 14 printing companies to form a corporation named Gyeonggi Hi-Tech Design and Printing Center in Suwon, Gyeonggi.

“Things you think you cannot do alone, you can make them work as you gather people with the same interests,” he says.