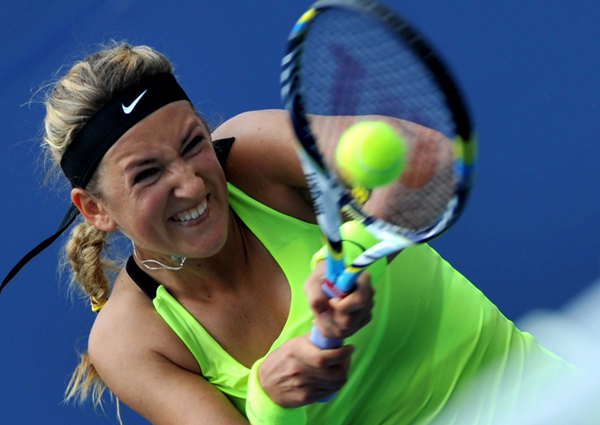 Victoria Azarenka of Belarus returns the ball during the women’s singles quarterfinals against Samantha Stosur of Australia at the U.S. Open tennis tournament in New York on Tuesday. Victoria Azarenka won 2-1 to enter the semifinals. [XINHUA/YONHAP]


NEW YORK - So, Victoria Azarenka, what went through your mind as your high-tension, high-quality U.S. Open quarterfinal victory over defending champion Sam Stosur stretched into a third-set tiebreaker?

“You don’t want to know what I kept telling myself,’’ Azarenka deadpanned Tuesday. “I would have to beep that, I think.’’

She went on to offer a cleaned-up version of what her thoughts had been - “Don’t be a chicken’’ - while cobbling together a 6-1, 4-6, 7-6 (5) rain-interrupted win that eliminated Stosur, put the top-seeded Azarenka in her first semifinal at Flushing Meadows and assured her of retaining the No. 1 ranking no matter what happens the rest of this week.

“Definitely I don’t want to stop. I really want it bad,’’ Azarenka said about the prospect of adding a second Grand Slam trophy to the one she earned in January at the Australian Open. “I’m going to do absolutely everything I have, you know, to give it all here.’’

Because of rain that halted play on and off throughout the day, Azarenka was the only woman who got to enjoy a singles victory at the U.S. Open on Tuesday. The other women’s quarterfinal on the schedule was suspended in progress because of rain, and four-time major champion Maria Sharapova will be trailing 2007 Wimbledon runner-up Marion Bartoli 4-0 when they resume Wednesday.

Sharapova got a bit of a reprieve from the weather during her previous match: She was down 2-0 in the third set against Nadia Petrova when a rain delay of 75 minutes came. After the break, Sharapova took five of the next six games. She’ll get at least 15 hours to contemplate her deficit against Bartoli, who lost all eight sets they had played before Tuesday.

They were allowed to head to their hotels before 6 p.m., because the tournament wanted to free up Arthur Ashe Stadium for the night session and the main event: 2003 U.S. Open champion Andy Roddick’s bid to postpone retirement yet again by beating 2009 champ Juan Martin del Potro in the fourth round. They started about an hour later than scheduled, and played for less than an hour before a rain delay came with Roddick ahead 1-0 in a first-set tiebreaker.

Also starting behind schedule was defending champion Novak Djokovic against No. 18 Stanislas Wawrinka, and No. 8 Janko Tipsarevic against No. 19 Philipp Kohlschreiber. Both of those matches were stuck in the first set when showers returned.

That match, like most this week at Flushing Meadows, took second billing to one involving Roddick, who surprisingly announced last week that this tournament would be the last of his career. Since then, he picked up victories over players ranked 43rd and 59th, but the No. 7-seeded del Potro figured to provide more of a challenge. Del Potro is the only man other than Roger Federer, Rafael Nadal or Djokovic to win any of the last 30 Grand Slam titles.

The women’s match pitted Stosur, the champion here last year, against Azarenka, who won the Australian Open to start the 2012 Grand Slam season.

Amazingly, as accomplished as Stosur is, she never had taken so much as a set off Azarenka in six previous tour meetings, including one match in qualifying.

That changed in Tuesday’s second set, although forcing a third might not have given Stosur all that much self-belief. And in the end, Azarenka improved to 11-0 in three-setters this season, while Stosur fell to 9-7.

“I think I’m capable of beating her one day,’’ the seventh-seeded Stosur said. “Just would have liked it to have been today.’’

Serving at 5-all in the third, Azarenka faced a break point and responded the best way possible, delivering a 92 miles per hour ace, her only one of the match.

Asked about that at her news conference, Azarenka’s response was telling: “When did I hit an ace? Did I hit one today, actually?’’