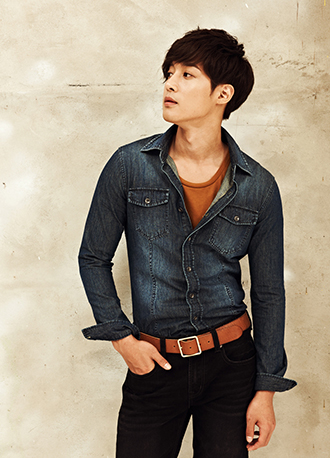 Singer and actor Kim Hyun-joong sported denim on denim, a fashion feat that is hard to swallow for most, for Hang Ten’s latest line.

In the advertisement, the Hallyu star showed off more than just the vintage blue denim shirt. His chiseled jawline and body were also on display, making female fans swoon.
Netizens who encountered the pictures have been gushing at how immaculate the singer looked.

Kim is currently filming the drama “City Conquest” in Japan.
Earlier in the year, Kim and his upcoming TV show made headlines when it was announced that four locales in Asia had signed contracts to purchase rights to the drama.
By signing with Japan, China, Hong Kong and Taiwan ahead of time, Kim made 11.8 billion won ($10.3 million).
By Carla Sunwoo [carlasunwoo@joongang.co.kr]