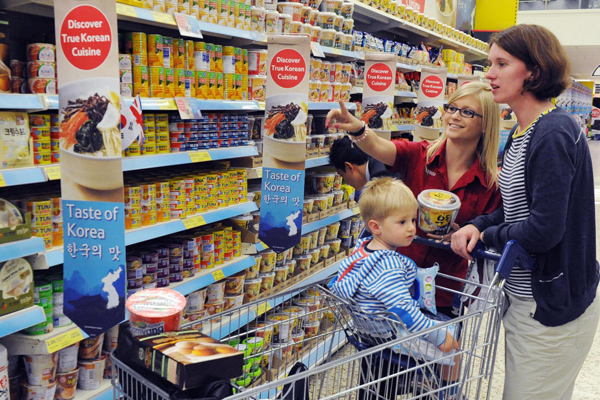 A British woman shops for Korean food products at a Tesco branch in New Malden, southwestern London, where a promotional event for Korean food called “Taste of Korea” was co-organized by Homeplus, Korea’s second-largest discount chain, and the Korea Trade-Investment Promotion Agency from July 30 to Monday. Homeplus said it will extend the event at 12 other Tesco branches throughout the U.K. from Sept. 24 to Oct. 14. Provided by the company


Homeplus said yesterday it will expand its promotional event for Korean food dubbed “Taste of Korea” to a dozen Tesco stores throughout the U.K. after it generated a buzz in London when it was launched there in July prior to the Olympic Games.

Homeplus, the nation’s second-largest discount chain that is owned by U.K. retailer Tesco, sold 150 types of Korean food products made by 25 food manufacturers at a Tesco branch in New Malden, southwestern London. The area is home to the largest concentration of Koreans in the U.K.

The event, which was organized in conjunction with the Korea Trade-Investment Promotion Agency (Kotra) and Tesco, was the second of its kind after a similar foray was made last year. It was designed to help small- and medium-sized food producers find new export markets, while also promoting Korean cuisine to the world.

“Philip Clark, the chief executive of Tesco, met with Homeplus CEO Lee Seung-han on the first day of the event on July 30, and discussed holding it in other stores as well,” said Seol Do-won, executive vice president of Homplus.

Having gained much popularity at the store in London’s de facto Koreatown, Homeplus will hold an “Encore K-Food” event at nine other Tesco branches throughout the capital, and three more in the east of England for three weeks from Sept. 24 to Oct. 14.

Homeplus plans to start selling 49 popular Korean food products regularly at the Tesco store in New Malden from mid-October, marking a new first for a Korean retailer. It is set to expand this to other stores in the future through consultations with Tesco, it said.

It hopes to overturn sluggish exports of Korean food products, which are popular in neighboring Asian countries but have little presence elsewhere.

Tesco, the No. 1 retailer in the U.K., has more stringent food safety standards than the British Retailer Consortium, Homeplus said, adding that this will help guarantee it can enter other demanding European markets.

“We will continue to cooperate with Kotra and Tesco using the latter’s network of stores across Europe,” said Homeplus CEO Lee.