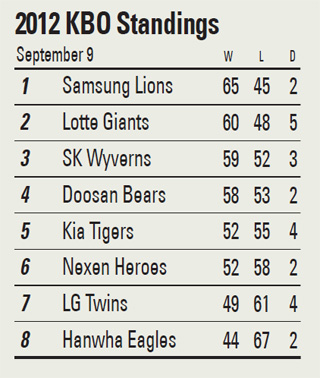 With an obliging schedule this week, the SK Wyverns will seek to gain ground on the second-place Lotte Giants.

The Wyverns, coming off three wins and two losses last week, will play two games against each of two second-tier teams: the seventh-place LG Twins starting tomorrow and fifth-place Kia Tigers on Saturday.

The Giants were 2.5 games ahead of the Wyverns as of Sunday.

The Busan club, trailing the league-leading Samsung Lions by four games, was set to play the cellar-dwelling Hanwha Eagles last night and Doosan Bears tonight before starting a three-game series against the Tigers.

The Giants finish the week with a doubleheader against the Lions on Sunday.

Keeping the runner-up position this week would mean a lot to the Giants, who are trying to win the Korean Series for the first time in 20 years.

After this week, the Giants have 13 regular season games remaining.

The surviving team earns a spot in the best-of-seven Korea Series against the regular season pennant winner.

Giants manager Yang Seung-ho made it clear that his priority is to extend his team’s lead over the Wyverns rather than catching the Lions. “We worked out a pitching rotation so that weaker pitchers could pitch in the Samsung matches while stronger pitchers could stand on the mound against SK,” Yang told reporters.

The Giants will play the Wyverns on Sept. 18 and 19 at Sajik Stadium, Busan, with ace Shane Youman expected to start in one of the two games. Youman has won 13 games in his first season with the Giants.

Something else to watch is the battle for fourth place and the final playoff spot between the Bears and Tigers.

The Bears were four games ahead of the Tigers as of Sunday, when Doosan had 20 regular season games remaining and Kia 22.