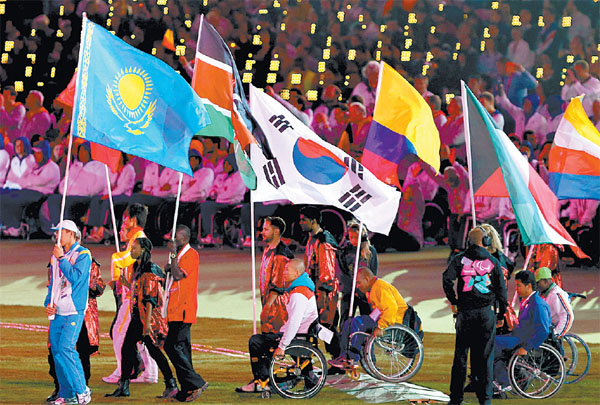 Flagbearers holding the national flags of the 166 participating countries including Korea’s Taegeukgi (national flag), center, parade during the closing ceremony of the London 2012 Paralympic Games at the Olympic Stadium in east London, Sunday. With nine gold medals, Korea finished 12th in the gold medal standings.[YONHAP]


LONDON - Britain’s spectacular summer of sport ended on Sunday with the Paralympic Games closing ceremony led by British band Coldplay as the Olympic Stadium once again hosted a memorable party for athletes and fans alike.

Paralympians rose and joined in with the Mexican waves inside the vast arena in east London even before the extravaganza was underway to signal the end of the 11-day festival of sport.

“We’ve shared some wonderful days haven’t we?” London Olympics chairman Sebastian Coe said to the packed stadium who gave a roar of approval.

“Days where incredible people have performed feats we hardly thought possible. The Paralympians have lifted the cloud of limitation.”

The ramped-up coverage and interest was felt everywhere, Alan Oliveira’s shock defeat of Oscar Pistorius in the 200 meters final even “knocked out” all the football coverage in Brazil, said IPC chief executive Xavi Gonzalez.

Pistorius said after his 400 meters win on Saturday that the Olympics and Paralympics in London had been “the biggest highlight” of his life.

“I’m floating on cloud nine, sometimes cloud 10 or 11,” he said. “When you get everything in alignment you get a damn big bang and that’s what we’ve had here,” he told a news conference earlier on Sunday.

Coe shared a story of his own at the conclusion of the British festival of sport that started on July 27 with the Olympic Games opening ceremony.

The twice gold medallist recalled a meeting on a tube train during the Olympics with a volunteer who was on duty as a doctor during the July 7 bombings in 2005 that claimed the lives of 52 people the day after London was awarded the Games.

Korea finished 12th at the 2012, and the country’s chief delegate said he was happy with “successful” performances put on by the athletes.

Jang Choon-bae, who led the delegation of 135 athletes and officials, said it was noteworthy that South Korean performances were well-balanced.

“We won medals from several different sports,” Jang said. “Overall, this was a successful Paralympics.”

The country had set out to win at least 11 gold medals to finish at least in 13th place. The medal tally in London is Korea’s lowest at a Paralympics since 1984, when it managed four medals total.

Jang added he hoped the government would create a better environment for disabled athletes to compete in different sports.

“I think it’s important to build conditions in which people with disabilities can participate in sports without difficulty,” he said. “We should promote sports participation at schools and try to nurture more athletes.”