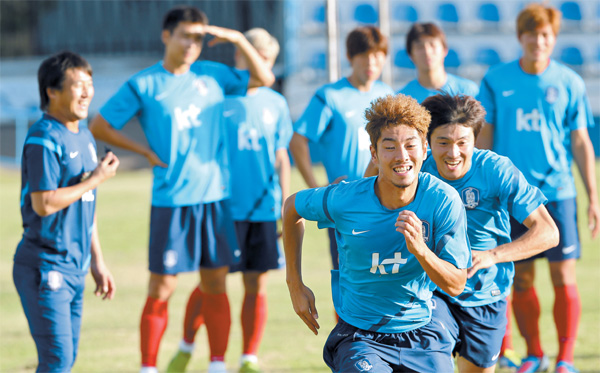 
When Korea played Uzbekistan in a friendly while competing in qualification matches for the 2010 FIFA World Cup, Lee Chung-yong and Ki Sung-yueng, then two star players for FC Seoul, known as the Twin Dragons, teamed up for Korea’s first goal.

Only three minutes into the match held in Suwon, south of Seoul, in 2008, Lee shot down the right wing and sent a cross into the box, connecting with Ki’s left foot. The midfielder volleyed a spectacular goal into the back of the net.

Things have changed since Korea’s 3-0 win four years ago. Now the Twin Dragons are playing for English clubs and will make their first appearance together under the management of Choi Kang-hee when Korea meets Uzbekistan at Pakhtakor Stadium, Tashkent, at 10 p.m. tonight KST.

The stakes are much higher this time around as well, with three points at stake in the final round of Asian qualifications for the 2014 FIFA World Cup. Korea is looking for its eighth consecutive berth to the quadrennial event.

The reunion of the dragons is one of the most highly anticipated storylines entering tonight’s match. Whether the duo can reconnect their old magic after playing in European leagues could make all the difference.

The nickname “Twin Dragons” partly stems from the same last syllable of their Korean names - Yong, meaning dragon (Ki spells his Yueng). But it also came about because of their ferocious chemistry, which helped FC Seoul reach the K-League championship in 2008.

That year, local football magazine The Best Eleven picked Ki, a midfielder, and Lee, a right winger, as the No. 1 and No. 2 most promising players of the next generation of Korean football, respectively.

Lee, 24, was absent from Korea’s two previous World Cup preliminary matches due to an injury he sustained last year. Ki, 23, has continuously played with the Choi squad.

Playing with a host of other former teammates may help them get back their FC Seoul chemistry quickly. In addition to Ki and Lee, there are five current or former FC Seoul players on the Choi squad including Park Chu-young, now playing for Spain’s Celta Vigo.

The last World Cup match the FC teammates played in together was in the Round of 16 against Uruguay during the 2010 World Cup in South Africa. Ki’s free kick was deflected and Lee headed the ball into the net in a 2-1 loss.