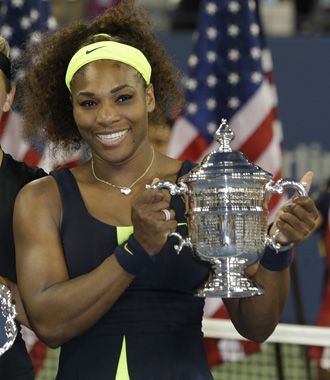 “I honestly can’t believe I won. I really was preparing my runner-up speech, because I thought, ‘Man, she’s playing so great,’’ Williams said during the trophy presentation, adding: “I’m really shocked.”

What really was stunning was that Azarenka made things as interesting as they were, given that she came into the day 1-9 against Williams over their careers.

Add in that Williams hadn’t dropped a set in the tournament, losing only 19 games through six matches before Sunday. All part of a tremendous run she is putting together in reaction to her loss at the French Open in late May, the American’s only first-round exit in 49 career major tournaments. Since then, she is 26-1, winning Wimbledon and the London Olympics.

There hadn’t been a three-set women’s final in New York since 1995, and Williams came through with a late charge to become the first woman to win Wimbledon and the U.S. Open in the same season since a decade ago - when she did it.

“She never gives up,” said Azarenka, who managed only 13 winners, 31 fewer than Williams. “She’s definitely the toughest player, mentally, there is and she’s got the power.”

While Azarenka, a 23-year-old from Belarus, doesn’t have the name recognition or bona fides of Williams, she did win the Australian Open in January, and was 32-2 (a .941 winning percentage) on hard courts in 2012.

She also hadn’t dropped a three-setter all season until Sunday, going 12-0 in matches that went the distance, including the win over defending U.S. Open champion Sam Stosur in the quarterfinals.