Sharp finds itself on the brink

Sharp finds itself on the brink 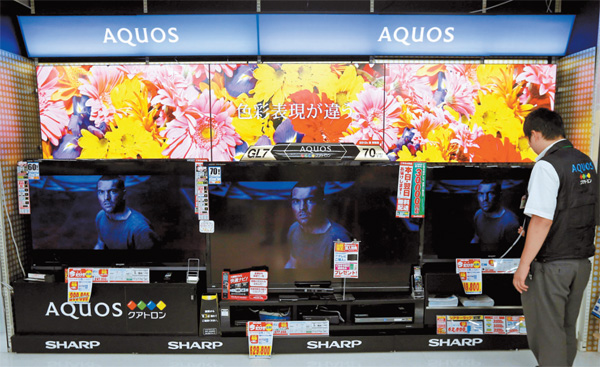 A salesperson looks at Sharp TV sets at an electronics shop in Tokyo Friday. Banks are hammering out a refinancing plan for TV maker Sharp without waiting for Hon Hai Precision Industry to agree to buy a stake in its struggling partner, sources at the lenders said, as talks between the Apple suppliers pause.[REUTERS/YONHAP]


The 100-year-old inventor of mechanical pencils needs to pen a new plan to make it to 101.

Sharp, Japan’s biggest liquid-crystal display maker, put up its Osaka headquarters and some plants as collateral last week to win bank loans after its credit ratings were cut to junk.

The supplier to Apple is also renegotiating a stock sale to Taiwan’s Foxconn Technology Group as it tries to recover from record losses and a 69 percent slump in shares this year.

Within six months of assuming office, its president, Takashi Okuda, 59, is firing employees for the first time in six decades after widening Sharp’s full-year loss forecast eightfold on plunging demand for TVs.

Sharp’s troubles are symptomatic of what’s ailing Japanese consumer electronics companies Sony and Panasonic as they reel from competition with TVs and phones by Samsung Electronics and LG Electronics.

“Sharp isn’t in a situation to think about the next century,” said Makoto Kikuchi, chief executive officer of Myojo Asset Management Japan, a Tokyo-based hedge-fund advisory firm. “It’s a matter of whether the company can survive in the next 12 months.”

Okuda must raise funds for a company that’s burning through cash. Total liabilities reached 2 trillion yen ($25 billion) at the end of June, the highest since at least 2003 - or more than four times the sales in that quarter, according to data compiled by Bloomberg.

Foxconn wants a stake in Sharp to secure access to the latest technology for parts used by its biggest customer, Apple. In offering a lifeline, Gou is betting that Sharp will continue to provide it with key components for the iPads and iPhones that Foxconn assembles, while ensuring one of Apple’s important suppliers survives.

Gou has invested 66 billion yen of his own money into the display venture with Sharp.

Widening losses and weakening demand amid a strengthening yen is the story of Japan’s electronics companies. Sony last had a profit in the year ended March 2008, and Panasonic has been unprofitable in three of the past four years. Like Sharp, both companies changed their CEOs this year.

“The Japanese electronics industry is in a crisis as Koreans and Chinese are catching up,” said Toshihiro Nagahama, chief economist at Dai-Ichi Life Research Institute in Tokyo. “Japan is good at making products with better performance, and that’s the easiest for newcomers to copy.”

The spokeswoman for Sharp, Miyuki Nakayama, declined to comment.

Sharp’s troubles began when the company relied on debt funding for its LCD factories in the Japanese cities of Kameyama and Sakai, which opened in 2004 and 2009, respectively. The investment for the two factories, totaling 1 trillion yen, weighed on Sharp as LCD prices started falling and a stronger yen ruined its competitiveness against Taiwanese and Korean companies. The average price of a 40-inch LCD panel used in TVs fell to $250 in the first quarter of 2012, less than one-tenth of the $2,772 price in the fourth quarter of 2003, according to researcher DisplaySearch.

The factory in Sakai, near Osaka, is an example of Sharp’s poor investment decisions, said Jeff Loff, a senior analyst with Macquarie Capital Securities in Tokyo. The world’s only operational 10th-generation facility, suitable for 60-inch TV panels, has been underutilized and adding to a glut since operations began in 2009. Another mistake was converting a production line at the Kameyama plant into facilities for displays featuring the IGZO technology meant for iPads, Loff said. The transition was too aggressive, he said.

“It probably would have been wiser to wait to convert the factory until it could prove consistent supply capability at high volume,” Loff said. “The company looks to have placed too much emphasis on trying to serve Apple with IGZO tablet displays.”

The plunge in share price hasn’t helped Sharp’s cause of raising equity from Gou’s Foxconn, which wants to renegotiate an initial plan unveiled in March. Gou’s group companies agreed in March to buy 9.9 percent of the Japanese manufacturer at 550 yen per share, a total bill of 67 billion yen. Separately, Sharp also sold a stake in the Sakai LCD plant to Gou for 66 billion yen to jointly run the factory.