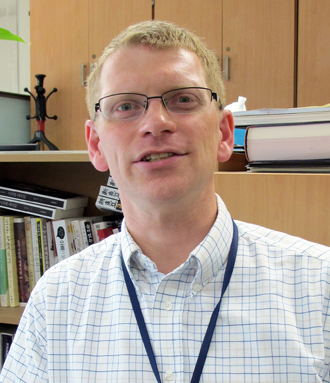 Dewey Moore, a United States diplomat who was dispatched last month to work in Seoul’s foreign affairs ministry for the next year, is currently the talk of the town.

On Aug. 28, on his second day at work, the 43-year-old second secretary visited the Ministry of Strategy and Finance in Gwacheon, Gyeonggi, and convinced Korean officials to set aside a portion of the country’s budget to pursue public diplomacy, a kind of foreign policy based on soft power such as culture and art.

“Public diplomacy allows a country to inform others about what’s good about the country,” Moore told finance ministry officials. “When other people have negative sentiments toward a certain country, it’s difficult for them to get to know the good sides of that country.”

Moore said that in the United States, around 20 percent of the newly recruited diplomats are working in the field of public diplomacy and Korea should also strengthen the importance of promoting public diplomacy.

“I’ve learned a lot about how budgets are allocated in Korea,” Moore said. “During my stay here in Seoul, I would like to offer practical support in Korea’s public diplomacy sector.”

Moore, who is the first American diplomat to be on detached duty in Seoul, joined the U.S. Foreign Service in 2006 and over the years of his career, he has served at the U.S. Embassy in Seoul and the U.S. Consulate General in Guangzhou.

“I’ve always liked Korea,” Moore said. “So I applied to work in Seoul when I was given the opportunity.”

Moore studied law and Asian studies at George Washington University in Washington. He first traveled to Korea in 1988 as a volunteer missionary. Before joining the foreign service, he worked as an attorney in the securities and litigation section of WilmerHale in Washington, and also as a management/ training consultant at LG Electronics in Korea.