Murray hopes U.S. Open title is first of many

Murray hopes U.S. Open title is first of many 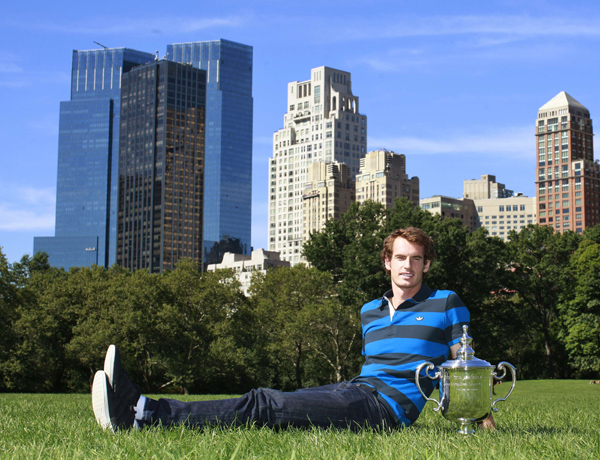 
NEW YORK - If it’s true, as they say, that the toughest Grand Slam title to win is your first, then Andy Murray was right to feel relief, above all, when he finally got No. 1 out of the way at the U.S. Open.

“I certainly was doubting myself a bit, and thinking about the match and how tough it was going to be, and whether I was going to be able to do it or not,” Murray said Tuesday, a day after beating defending champion Novak Djokovic over nearly five hours in the final at Flushing Meadows, “so I’m just glad that I finally managed to do it.”

As he spoke those words, Murray stared at his reflection in the shiny silver trophy he so longed for and now had earned, adding: “And I hope it’s not the only one.”

No reason to believe it will be.

Indeed, with his defensive and returning skills, and a new willingness to be aggressive with his forehand, Murray might very well be considered the man to beat when tennis returns to the Grand Slam scene at the Australian Open in January.

For proof, Murray needs to look no further than his coach, Ivan Lendl.

Until letting a two-set lead against Djokovic evaporate, then mustering all the gumption required to prevail in a fifth, Murray was 0-4 in Grand Slam finals. Only one other man in the Open era, which began in 1968, lost his first four major titles matches. That man, of course, is Lendl, who eventually figured out how win the big one and accumulated eight Grand Slam trophies of his own.

Before Monday’s match, Murray and Lendl chatted. Murray was anxious during his warm-up in Arthur Ashe Stadium. He was anxious in the locker room.

“He just said to me, when we spoke, ‘Just enjoy the match. It’s what you work all your life towards, so just enjoy it,’?” Murray said.

Looking very much like any 25-year-old might on a day off, in dark jeans and a striped polo shirt, Murray chuckled while recounting that conversation, which offered a tiny taste of his dry wit.

He met with reporters Tuesday while sitting at a wooden dining room table in the Manhattan residence of British Consul-General Danny Lopez.

A bagpiper greeted Murray’s entrance, a nod to his Scottish homeland. Standing near a lithograph of Queen Elizabeth II by Andy Warhol, Lopez presented Murray with a basket of Scottish treats, including bottles of Irn-Bru, a rust-colored carbonated fruit drink.