Seoul may block cars from some neighborhoods

Seoul may block cars from some neighborhoods 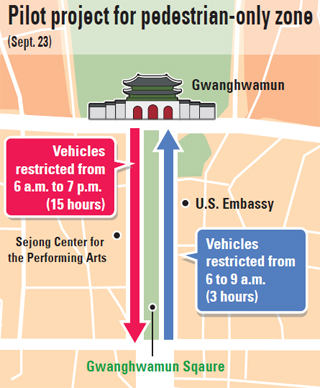 The Seoul Metropolitan Government said yesterday it will block traffic from 550 meters (601.5 yards) of the western lanes of Sejong-daero between Gyeongbok Palace and Sejongno Sageori (or intersection) from 6 a.m. to 7 p.m. on September 23.

The opposite lanes of the boulevard, where the U.S. Embassy stands, will be designated a pedestrian zone for a shorter period, from 6 to 9 a.m. on the same day, for a bicycle event.

All vehicles will be restricted from the zones, and pedestrians and bicycles will roam freely.

Gwanghwamun was selected as a pilot area for a larger pedestrianization project because of its many government offices, commercial buildings, ancient palaces and museums.

Last week, the municipal government said it would like to ban cars from several areas including Gwanghwamun and Myeong-dong, the crowded shopping district popular with tourists, to create pedestrian-friendly environments in Seoul. Other crowded districts such as the Guro industrial complex in the southwest and Dongdaemun Design Plaza are included in the plan.

On the test day of Sept. 23, an extreme bike performance show will start at 9 a.m. and an agricultural produce market will operate from 10 a.m. to 5 p.m. From noon to 4:30 p.m., strollers will be entertained by gukak, or traditional Korean music, a jazz concert and belly dancing.