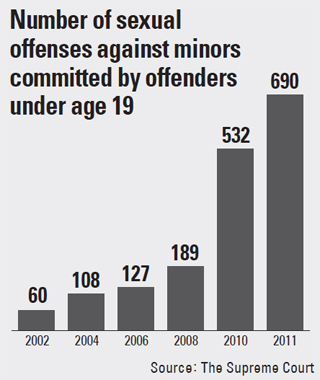 The number of teenagers committing sexual offenses on fellow minors has grown by 11 times over a decade, the Supreme Court said yesterday.

Since 2002, the number has risen every year sometimes substantially.

Also, the study shows a total of 1,836 people under the age of 19 were convicted of sexual-related crimes last year in which the victims were under 13 or over 18. The crimes include rape, sexual assault and prostitution, and the number is a three-fold increase from 600 in 2002. The number of minors who were convicted of prostitution or patronizing prostitutes reached 141 last year, a jump from 63 in 2002. 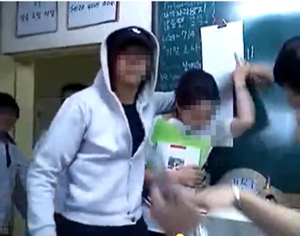 The report comes after a string of violent sex crimes, prompting authorities to toughen penalties, increase monitoring of sexual offenders and crack down on people distributing pornography on the Internet.

“Efforts to reduce the increased number of sexual crimes by minors require us to contemplate the role of proper parenting for children.”

In contrast to the minors, the number of adult sex crimes in the past 10 years has not shown big changes, hovering around the 2,000 mark over the period. The number of people aged 19 and over convicted with rape and sexual assault was 2,337 last year, up from 1,981 in 2002.