Giant collapse in KBO all too familiar for Busan

Giant collapse in KBO all too familiar for Busan 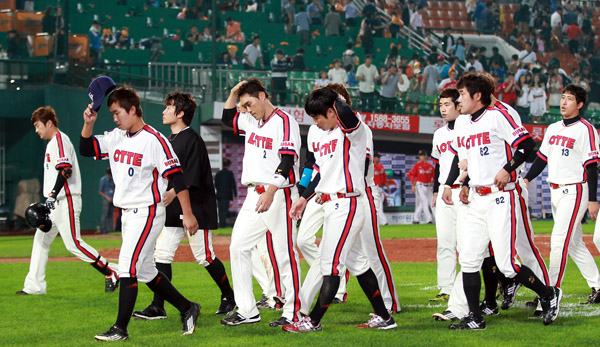 Lotte Giants players walk off the field after a 7-0 rout against the SK Wyverns at Sajik Stadium in Busan on Wednesday. With the loss, the Giants slipped to third place. By Lee Young-mok


Before the Lotte Giants clinched their first-ever direct berth to the second round of the playoffs last year, the Busan-based club had to fend off a tenacious comeback by their archrivals, the SK Wyverns. It was only with two matches left the season with the Giants clinched second place in the standings.

The situation is developing in a similar fashion this year and the Giants, bidding their first Korea Series title in 20 years, are hoping the lackluster performance during the most recent two-game series against the Incheon club is not a sign of things to come with 12 regular season games left.

With a second straight loss to the Wyverns on Wednesday, the Giants are now behind SK for the first time this season, trailing by half a game. The fourth-place Doosan Bears are only one game behind the Giants after Wednesday’s plays, as of yesterday evening.

The Wyverns, struggling in sixth place earlier this season, climbed to the runner-up position over the past two months with impressive performances including a 3-1 win on Tuesday and a 7-0 rout on Wednesday, both at Sajik Stadium in Busan.

Things do not look favorable for the Giants. Four of the remaining 12 games are against the comfortable front-runner Samsung Lions. Three others will be against the fifth-place Kia Tigers.

For the Wyverns, six of their 14 remaining matches are against the seventh-place LG Twins and the last-place Hanwha Eagles.

There are two remaining matches between the two clubs.

The Giants are still slightly ahead in the head-to-head matchup with nine wins against eight losses, but the three-time Korea Series winner has history in its side with SK leading 83-44 all-time.

Even if the Giants manage to finish second in the pennant race, the team will probably meet the Wyverns again in the best-of-the-five pre-champion decider called the Playoff Series in Korean.

In the KBO playoff system, the winner of the regular season earns a berth to the Korea Series. The runner-up advances to the so-called Playoff Series. The third- and fourth-place teams meet in the first round.

If the Giants fail to overcome the weak offense on display against the Wyverns, they may have to watch history repeat itself. The Wyverns, who finished third in the 2011 pennant race, beat the fourth-place Kia Tigers 3-1 in the best-of-five first round and beat the Giants 3-2 in the Playoff Series.

The Giants’ batting force is ranked at the bottom of the eight-team KBO this season with their average runs per game at 3.9. This month, Lotte is averaging 3.1.