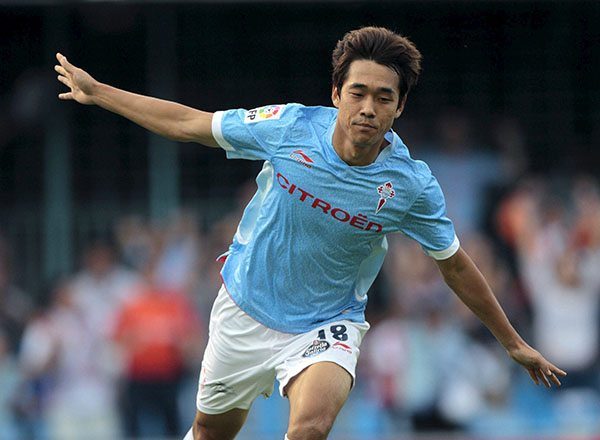 
Korean striker Park Chu-young scored on his first touch during his home debut for Celta Vigo, leading the Spanish side to a 2-1 victory over Getafe during their La Liga match on Saturday.

Park, who helped his country win the bronze medal at the Olympic Games in London, joined Celta on loan from Arsenal on the day of the transfer deadline three weeks ago. He went on at Balaidos Stadium in the 66th minute and volleyed in Michael Krohn-Dehli’s cross two minutes later.

Park’s strike marked the first-ever goal in the prestigious Spanish league by a Korean player.

The striker wasn’t the only Korean to shine in Europe over the weekend. Forward Son Heung-min also shined Saturday in Germany, scoring twice in Hamburg SV’s 3-2 win over defending champion Borussia Dortmund.

In England, Korean midfielder Ki Sung-yueng made his first full-time performance for his new club Swansea City, but the Wales-based team suffered a 3-0 loss at Everton, its second of the season.

In Spain, Celta had taken the lead in the 57th with a breakaway goal from Augusto Fernandez, only for Abdelaziz Barrada to level almost immediately after a well-worked move.

Park’s jump volley shot, which some fans called the “Taekwondo shot,” was the get-ahead goal in the 68th minute.

Park had the chance to score a second near the end but he pulled his shot wide with only the keeper to beat. It was a second match that the 27-year-old Korean forward played for Celta Vigo. Celta coach Paco Herrera told AFP that Park made a valuable contribution.

Celta’s second win put them ninth in the standings with six points from five games, two places ahead of Real Zaragoza, who won 3-1 at home to bottom side Osasuna.

League leader Barcelona maintained their perfect start on Saturday as Xavi crashed a shot into the top corner three minutes from the end and Lionel Messi forced a stoppage-time own goal. Barca moved on to 15 points from five games, opening an 11-point gap over champions Real Madrid who visit city rivals Rayo Vallecano today looking for their first away win this term.

In England, Everton beat Swansea with goals from Victor Anichebe, Kevin Mirallas and Marouane Fellaini in an exciting lunchtime match in Wales in which both sides also hit the bar. Swansea were reduced to 10 men when Nathan Dyer was sent off 12 minutes after coming on as a halftime substitute but even with 11 men they had been no match for a far superior Everton.

Chelsea needed a late winner by England fullback Ashley Cole to beat Stoke City 1-0 and move three points clear at the top of the Premier League on Saturday with all their main title rivals yet to play the weekend.

In Germany, Dortmund’s 31-match unbeaten run was put to an end in Hamburg.

The hosts needed just two minutes to score when Rafael van der Vaart was given far too much space on the left to cross and Son beat Mats Hummels to head in his second goal of the season. Dortmund instantly took control, launching a barrage of attacks until halftime but neither Marco Reus nor Robert Lewandowski could beat keeper Rene Adler.

Ivan Perisic did it better, lobbing in the equalizer from the left 21 seconds after the restart. In a frantic five-minute spell, however, the hosts struck twice through Ivo Ilicevic and Son before Croat Perisic cut the deficit on the hour.

With the third goal for the season, including his first goal on Sept. 16, Son is sharing a runner-up position for the most goal of the season.