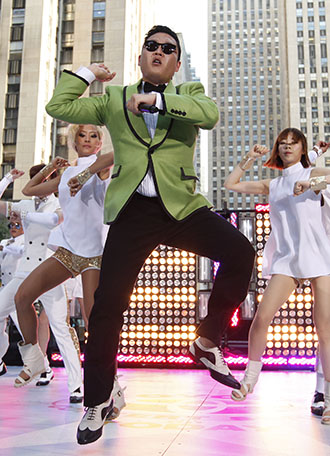 Psy’s meteoric rise is now officially one for the history books - the Korean galloping singer has made it in the Guinness Book of World Records.

The music video of his “Gangnam Style” that features the famed horse-trotting dance secured the Guinness World Record for the “most liked” video on YouTube, eclipsing the previous record holder, LMFAO’s “Party Rock Anthem.” As of yesterday, the Korean singer’s music video had 2.45 million “likes” while the American electro-pop duo received less than 1.6 million.

“Having been the ‘Have you seen this?!’ video of the last two months across the Web, it’s great to be able to award a record for this tremendously popular video,” Guinness World Records community manager Dan Barrett said, referring to Psy, in a statement, according to The Hollywood Reporter.

With the “Gangnam Style” music video, posted on YouTube on July 15, the 34-year-old Korean singer shot to an international fame, which earned him appearances on major television networks in the U.S. including NBC’s “Saturday Night Live.”