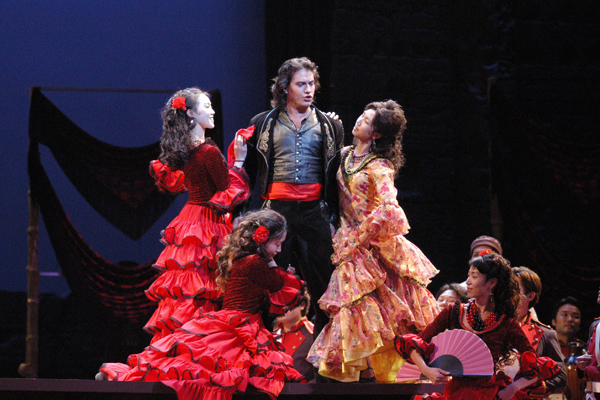 The Korea National Opera will perform “Carmen” at the Opera Theater of the Seoul Arts Center from Oct. 18-21 in southern Seoul. See THEATER, below. Provided by the organizer

Oct. 7: Singer-songwriters Jung Jae-hyung and James Morrison will be performing at the Yonsei University Amphitheater on Oct. 7. Korean Jung is recognized throughout the nation, and after a long break to study music in France, has come back to perform alongside James Morrison.

This will be Morrison’s first show in Korea.

Oct. 16 and 17: Latvian violinist and conductor Gidon Kremer and his chamber orchestra, the Kremerata Baltica, are coming to Korea for the first time in three years. As 2012 marks the orchestra’s 15th anniversary, the performances are all the more special.

Programs vary depending on the day of the show.

The concerts will begin at 8 p.m.

Oct. 23: First founded in 1930 as the official orchestra of the Soviet All-Union Radio network, the Tchaikovsky Symphony Orchestra is Russia’s oldest symphony and is considered to be one of the best. The concert will be led by Vladimir Fedoseyev, artistic director and chief conductor of the orchestra. The program includes compositions of the Tchaikovsky Violin Concerto and the Shostakovich Symphony.

To Oct. 7: “A Journey,” by the late Yoon Young-sun, is centered on the friendship of six men and how they came to support each other in times of hardship.

Performances will start at 8 p.m. Monday to Friday, with an additional show at 3 p.m. on Wednesday.

There are no performances this Sunday, and only one performance at 1 p.m. next Monday.

To Oct. 7: “Wicked” is a musical based on Gregory Maguire’s best-selling novel “Wicked: The Life and Times of the Wicked Witch of the West.” The Broadway production has been nominated for 11 Tony Awards, including Best Musical. Performances are at 8 p.m. weekdays; 2 p.m. and 8 p.m. on Saturday; and 1 p.m. and 7 p.m. on Sunday and holidays.

Oct. 11 to 14: After having won the Grand Prize and other prominent honors at the 2009 Korean Theater Awards, “Peer Gynt” is back with a newly upgraded cast and production team. Based on the Norwegian dramatic piece of the same name, this five-act play revolves around the colorful life of a vain poet, Peer.

The show begins at 8 p.m. on Thursday and Friday, and at 3 p.m. on Saturday and Sunday.

Oct. 18 to 21: The Korea National Opera presents the acclaimed “Carmen.” The French opera has been performed numerous times at the world-renowned stage of the Orange Opera Festival in France and has been picked as the No. 1 opera Korean audiences aspire to see.

To Oct. 21: The popular musical is back after its performance in 2005, and this time, it will be shown at Sangsang Art Hall. The story centers around rock singer Hedwig, who after a failed sex reassignment surgery goes on an American tour. The musical starts at 8 p.m. Tuesday to Friday; 6 p.m. and 8:30 p.m. Saturday; and 7 p.m. holidays and Sunday.

Oct. 26 to Jan. 20: This musical centers on the last king of the Baekjae Period, who involved the country in brutal wars. The escalating hatred from his people leads to vengeance.

Tomorrow to Saturday: For the last three days of September, the Chongdong Theater is hosting a festival with face-painting, janggu (traditional Korean drums) and other traditional activities and games.

Admission is free tomorrow and Friday, but on Saturday, a fee of 10,000 won will be charged.