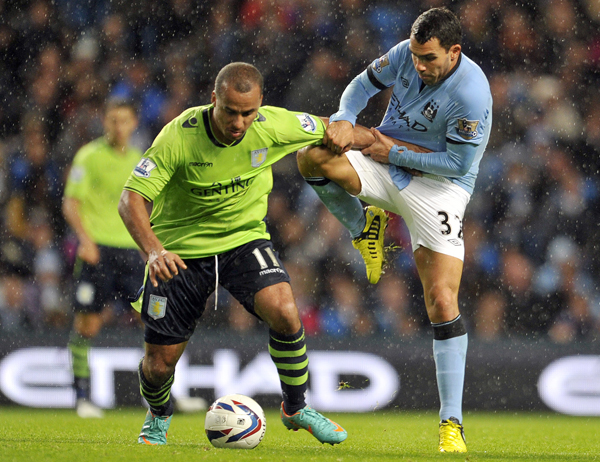 Manchester City’s Carlos Tevez, right, and Aston Villa’s Gabreil Agbonlahor battle for the ball during their English League Cup third-round match at Etihad Stadium in Manchester, England, Tuesday. City was knocked out with a 4-2 loss. [AP/YONHAP]


LONDON - Premier League champions Manchester City and in-form Everton were both sent packing from the League Cup on Tuesday, their respective managers paying the price for making wholesale changes to their starting lineups for the third round competition.

City lost 4-2 after extra-time to top flight rivals Aston Villa with a completely different team to the one that started the 1-1 draw against Arsenal on Sunday, while Everton made six changes and were beaten 2-1 by second tier Leeds United.

Chelsea also rung the changes but, captained by John Terry despite this week’s FA hearing over charges of racial abuse, emphatically booked its place in the fourth round with a 6-0 win over Wolverhampton at Stamford Bridge.

Garry Monk scored in the 90th minute for the Premier League’s Swansea City, who came from 2-1 down late on to beat third tier Crawley 3-2, while Wigan Athletic won 4-1 in an all-Premier League encounter against an under-strength West Ham United.

The latter drilled home a low shot to give City the lead with his first club goal since March, before Villa levelled when their former midfielder Barry deflected the ball into his own net.

Aleksandar Kolarov whipped in a free kick to give City the advantage for the second time on 64 minutes but Gabriel Agbonlahor levelled five minutes later to force extra time. Charles N’Zogbia pounced on a loose ball to make it 3-2 and Agbonlahor wrapped up the tie with the aid of a big deflection that caused his shot to loop over City keeper Costel Pantilimon.

“I’m disappointed for the result, Aston Villa are a good team but we didn’t play well,” City manager Mancini said.

“Our play is not quick, we want to take one touch too many, this is not good.”

The visitors had made a barnstorming start to the Premier League campaign, sitting third after five matches, but their new-look 11 were quickly under pressure at Elland Road.

They fell behind when Aidy White tore his way through the heart of the visitors’ defence and curled a shot into the top corner after four minutes.

Leeds doubled their lead when a Danny Pugh shot was prodded into the bottom corner by Rodolph Austin in the second half before Sylvain Distin headed in a late consolation.

“I didn’t think there was a weakness tonight, I thought we deserved it and make no mistake, they wanted this tonight, they wanted to win,” Leeds manager Neil Warnock said on Sky Sports.

“We put our head and bodies on the line but you have to do that in the cup.”

Chelsea’s Terry returned to their lineup, having started on the bench for Saturday’s Premier League clash against Stoke City, seemingly able to put allegations that he racially abused Queens Park Rangers defender Anton Ferdinand out of his mind.

But it was his central defensive partner, Gary Cahill, who headed in a Juan Mata free kick after four minutes before Ryan Bertrand stroked home from 10 meters (33 feet) and Mata effectively ended the contest by scoring their third after only 17 minutes.