Shinsegae fined after favoring its own unit

Shinsegae fined after favoring its own unit


The Fair Trade Commission slapped a 4.06 billion won ($3.6 million) fine on three Shinsegae Group retail affiliates on charges of unfairly giving commission discounts to bakeries and restaurants run by a non-listed affiliate that is linked to the group owner’s daughter.

The subsidiaries have also been ordered to stop the practice. 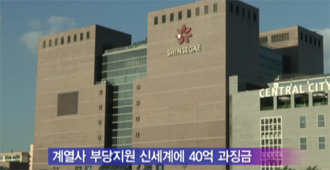 The FTC found that Shinsegae SVN’s business turned sluggish in 2009, and Shinsegae Group decided to help it out by lowering the ratio of the commission fees on total sales that its outlets renting space at department stores and discount stores were supposed to pay by as much as 13 percentage points. That caused unfair competition, said the FTC.

After Shinsegae Department Store slashed commissions to 15 percent from 25.4 percent for Vecchia and Nuovo in March 2008, the outlet saved 12.8 billion won.

“As the group’s family members own shares in the bakery subsidiary, giving commission discounts is pursuing profits for the family’s own interest,” said an official with the FTC’s market surveillance bureau.

From the same time in 2010, E-Mart charged a 1 percent commission to Shinsegae SVN’s Super Prime Pizza. The standard commission would be between 5 and 10 percent.

In a document written in September 2010 and released by the FTC last Friday, Shinsegae SVN said it recovered its sales in July thanks to the group’s support after it struggled in the first half of the year. The document also states that the subsidiary will continue seeking help from the group.

The FTC said that the special treatment given to Shinsegae SVN pushed competitors out of business. While Shinsegae SVN was thriving, competing chains, including Daehan Flour’s Cafe Artisee and local bakeries, closed down around 200 stores nationwide.

“It’s not fair for large companies to help operations of its subsidiaries, especially the ones run by the group owner’s family, and hurt the sales of local stores,” said the FTC’s official.

A week before the FTC’s embargoed announcement last Friday, Chung said she will sell her 40 percent shares of Shinsegae SVN.

Although Shinsegae has continued operations of its bakery unit, the nation’s other major conglomerates have sold pet projects of their relatives earlier in the year.

Shinsegae Group said in a statement yesterday that it did not provide any “excessive” support and it will review the legal options to avoid paying the fine.