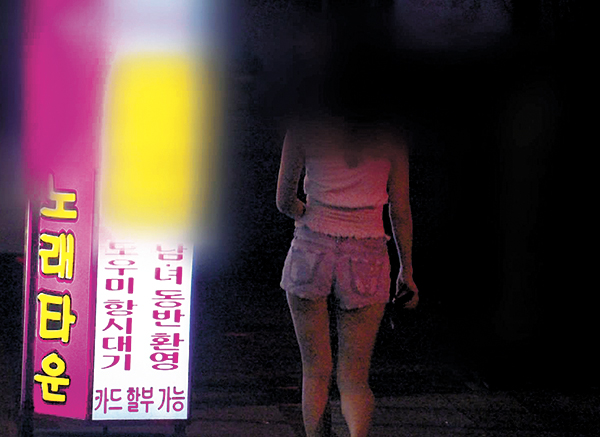 A doumi walks by a sign that reads “noraebang [singing room] doumi on standby at all times.” The job is considered so dangerous that insurance companies tend to reject applications for life insurance coverage. Captured from JTBC TV footage.


When noraebang, or singing rooms, first appeared in the 1990s, they were intended to be a healthy place for entertainment for everyone from children to the elderly. It didn’t take long for them to begin offering alcohol and doumi, which means helper in Korean and, in this context, refers to women who work in adult entertainment establishments. They sing and drink with customers, which often leads to more than that.

The Joongang Ilbo and JTBC investigated the work life of doumi to explore why the ladies have chosen to be employed in this often-dangerous environment and what kinds of risks exist for them.

At 11 p.m. in August on a street near City Hall in central Seoul, JoongAng Ilbo reporters visited a noraebang with a large sign reading “attractive doumi on standby at all times.”

After passing through a small passage painted pink and red, a man who looked to be in his 40s welcomed the reporters.

“Hello, do you all need doumi?” the noraebang owner asked immediately as he saw that the reporters were all men. “If they aren’t pretty enough for you, we can change them until you are satisfied. They’re all in their early- and mid-20s.”

Ten minutes after being seated, two young ladies came in. They introduced themselves with their surnames Kim and Goh. They already looked pretty drunk.

“Honey, I’m dying in here,” Kim said as soon as she seated herself. “I already had too much whiskey and beer.” They said the reporters were their third customer group.

They are best friends who graduated from high school together in February and then moved to Seoul. They entered a university in Seoul and studied fashion design, but it was too hard to study and make money for school tuition at the same time.

They worked at convenience stores and restaurants, but the pay was too meager to cover their expenses. They finally chose to work as doumi. They go to school during the day and work at the noraebang at night.

Days later, the JoongAng Ilbo reporters visited another noraebang in Gangnam District, southern Seoul. They met a 26-year-old doumi surnamed Lee. She graduated from a university outside of Seoul and was looking for a job.

She studied business administration in school and her GPA was high. She tried to get a job in a bank but didn’t have any luck.

She said she needed money in order to live in the capital city until she secured a decent job. She only wanted to work as a doumi temporarily, but she had been at the job for two years.

“I go to an English hagwon in the daytime and work as a doumi at night,” she said. “I lied to my parents that I got a job at a small company in Seoul.”

Brokers who supply ladies to the noraebang take half of the money, and doumi take the other half. Noraebang earn money by selling alcohol and snacks. Customers pay between 30,000 won to 50,000 won for an hour with a doumi.

According to a report on female prostitution in 2010 filed by the Ministry of Gender Equality and Family, about 20 percent of noraebang in the country offer women. The report estimated that there are a total of 40,000 noraebang nationwide, which indicates that more than 8,000 noraebang offer women. About 26,000 women work as doumi.

“Working as a hostess in a room salon, or a hostess bar, is tougher and more dangerous as they are often connected to gangs,” a doumi surnamed Lee told the JoongAng Ilbo. “We can only work when we want and also quit whenever we want. The noraebang is my first option whenever I need money.”

Last month, the Seoul Central District Court ruled that an insurance company didn’t have to pay life insurance for a doumi surnamed Kim, who was killed by a customer when she went to a motel for prostitution after working in a noraebang in Busan in November.

The court said that the insurance company didn’t have to pay compensation because the victim gave her job as a homemaker, not a noraebang doumi, so the company isn’t responsible for the harm that she exposed herself to as a doumi.

The JoongAng Ilbo consulted with the insurance company.

“We assess the level of injury in accordance with a client occupation,” an insurance agent told the JoongAng Ilbo. “If a woman put her occupation as a noraebang doumi, it wouldn’t even be possible for her to buy a life insurance policy.”

In Changwon, South Gyeongsang, one doumi was murdered at a motel by a drunken man when she met him for prostitution. A 40-year-old suspect surnamed Kim, who was on the police’s wanted list since 2008 for raping three doumi after threatening them with a knife with his friend in Songpa-dong, southeastern Seoul, was arrested on Sept. 3.

Three of the victims murdered by Kang Ho-sun, a serial killer charged with killing seven women from 2006 to 2008, were also doumi.

Women working in adult entertainment establishments such as room salons or prostitution are exposed to crimes, but they actually have their own protection provided, unlike doumi. For prostitutes, the service takes place inside their own business and they also hire guards to respond swiftly to many unexpected accidents.

“We never send our hostesses out of the shop for prostitution unless we know the customer very well,” an owner of a room salon told the JoongAng Ilbo.

“We usually send hostesses to a motel that we have been in cooperation with and also only offer an average of 30 to 40 minutes for prostitution. If the hostess doesn’t come out for a long time or we hear someone screaming, our hired guards break down the door.”

Unlike these room salons or prostitution establishments, noraebang do not have protection; therefore women working there are exposed to potential crimes.

“The scariest part of the job is when we face a strange man without any protection,” a doumi said. “We get scared every time we hear about crimes at noraebang on the news, but we don’t have any other choice.”

“They think they are not responsible for crimes against doumi because they know that the ladies are considered a lower class of society.”