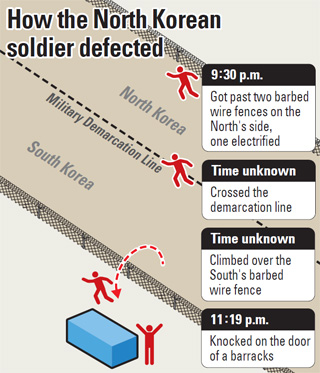 An Army unit on the eastern front tried to cover up the fact that a North Korean soldier managed to defect across the Demilitarized Zone by walking into their camp on Oct. 2 and knocking on the barracks door, military sources confirmed yesterday.

The investigation team of the Joint Chiefs of Staff suspects that the unit didn’t want to be exposed for lax security on the border.

“After criticism [and speculation] that the South’s security installations on the front line were vulnerable, the special investigation team under the Joint Chiefs of Staff launched a probe on Monday to find out whether the unit was following proper security conditions,” said a military official yesterday. The investigation is still ongoing.

“Despite what the unit initially reported, the investigation has shown so far that the North Korean defector was able to reach the general outpost without any restraint and was able to knock on the door of the barracks before expressing his will to defect,” said an official in the investigation team. 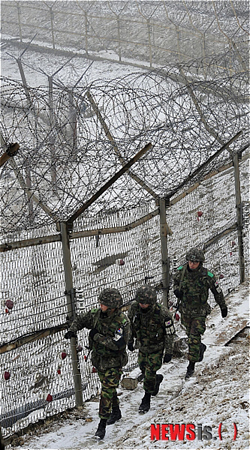 Earlier, the Joint Chiefs of Staff announced that the defector had first been spotted on surveillance footage by a South Korean soldier on duty. Jung Seung-jo, chairman of the JCS, told the National Assembly Monday that the “North Korean defector was seen on closed-circuit television,” based on a report from the unit.

According to the investigation team, however, Jung was misled by the report.

Criticism is now rising over the military’s lax security and false reports.

He climbed over one South Korean fence by using his clothes to shield himself from the barbs. The military has installed a four-meter (13-foot) barbed wire fence.

According to an investigation team official, the North Korean soldier headed toward lights he could see along the South’s patrol path and approached the barracks.

At 11:19 p.m., the soldier knocked on the door of the barracks, which are 10 meters away from the barbed wire fence. South Korean soldiers on duty in the barracks spoke to the defector and took him into custody.

The Joint Chiefs of Staff is still searching for the exact location of where he climbed the fence on the southern side and trying to figure out how he got through the fences in the North. The investigation is being carried out jointly with the National Intelligence Service and other related agencies. They want to know the exact route the defector used.

Defections across the land border were considered rare, but this year alone, three soldiers from the North have done so, according to the Ministry of National Defense. One dashed across the demarcation line near Kaesong last Sunday after shooting two of his superior officers.

Speculation is rising that the North’s military under its new leader Kim Jong-un is experiencing instability.