Defector writes thesis on orphans in the North

Defector writes thesis on orphans in the North 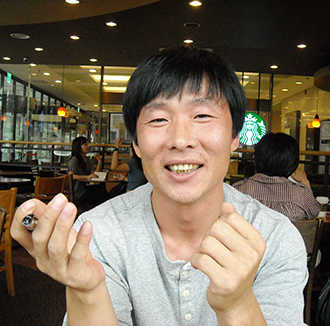 Kim Hyeok, a 30-year-old North Korean defector, has written a thesis for his master’s degree at Sogang University about his life as an orphan and beggar under the regime.

He lost his mother at age 4 and began begging for food and money at age 9 in his hometown, Chongjin, in the northeast of the country. Avoiding the surveillance of security policemen, Kim said he begged at train stations and stole food at local markets.

When he turned 13, his father died of starvation.

“It was quite a shock to witness the death of my father because he was a former special agent and a Workers’ Party member who infiltrated the South three times,” he said. “He was even awarded the Kim Il Sung watch for his dedication to the regime.”

In October 1998, when he was 16, Kim attempted to flee to China but was quickly arrested by North Korean border guards. He was sentenced to three years in jail and released in 2000.

“It was miserable to live without a family, a house or food,” he said. “In December 2000, I determined to defect to the South, and I did.”

After a difficult journey, he arrived in Seoul in September 2001 via Mongolia. He entered Sogang University to study public administration and received a master’s degree in August, with his first thesis titled “Studies on North Korea’s Kotjebi.”

Kotjebi refers to the North Korean homeless, orphaned children who have to find a way to survive on their own. It’s direct translation is “flowering swallows.” Kim said that there are mixed views on the origin of the word. Some say it suggests “a young beggar who appears in a flowering spring like a swallow.” Others say it comes from the Russian word koyebbe, or a wanderer.

“Although the issue of the kotjebi drew public attention, there were few studies on it,” Kim said. “So I had much trouble in writing about a thesis on it.

“The kotjebi is the only group in the North that is almost free from the strict control of the North Korean authorities. Their organizations are usually based in markets or train stations, and they are able to easily move from one place to the other, delivering and spreading information among the people.

“I believe that an in-depth study on kotjebi would become useful material in preparing for the unification of the two Koreas,” he said.

Kim wrote the thesis and earned the master’s degree with the help of Kim Yeong-su, a North Korean studies professor at Sogang University. Kim Hyeok said that when he was a student majoring in history at Catholic University of Korea in 2009, Professor Kim approached him at a public event and asked him to study North Korean affairs with him.

“Right after I arrived in the South, I traveled all around the country for the next three months,” Kim Hyeok said. “So I spent about 10 million won [$9,000] out of the government subsidy of 21 million won [that is given to defectors]. This is all because of my nature as a former kotjebi.”

“I hope to publish the thesis as a book,” Kim said, “and I will aim for a doctorate degree [in the same field] as well.”