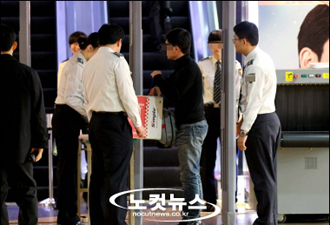 The government has come under fire for poor management of ex-convicts who are wearing electronic tracking devices as a few who took trips overseas didn’t come back.

According to the legislative inspection report regarding ex-convicts’ departures overseas which lawmaker Seo Young-gyo from the Democratic United Party received from the Ministry of Justice, a total of 26 ex-convicts have traveled overseas since 2008, when the electronic supervision policy was introduced, but two of them have not come back.

The two are currently on the ministry’s wanted list.

One of the two ex-convicts was previously jailed for three years for raping a minor and was ordered to wear an electronic tracking device for three years after being released.

The other was jailed for 12 years for murder but was released on parole 16 months before his prison term expired with the condition he had to wear an ankle bracelet.

The rapist was approved to travel for business for five days to China and left the country on Nov. 24, 2010.

The murderer was approved to travel to China for three months for job seeking and left the country in Feb. 18. Both did not come back.

Under the law, ex-convicts are allowed to travel overseas for up to five months when their local inspector, who monitors their whereabouts through the GPS system on their tracking devices, approves a travel request.

Ex-convicts can request a trip for many reasons including tour, business and job seeking and they are not forced to wear the tracking device when traveling.

They are only required to report their whereabouts every day through an e-mail or phone call.

“The standard for allowing an ex-convict to travel overseas isn’t very clear,” lawmaker Seo from the DUP said.

“It is not right to allow local inspectors to decide ex-convicts can travel if the Justice Ministry is really trying to prevent repeat crimes,” Seo added.

“Ex-convicts are not subject to the prohibition of departure,” a spokesman for the Ministry of Justice said.

“The freedom of residence and moving is guaranteed under the law. The best option for now is to rely on local inspectors’ judgment because they monitor ex-convicts every day.”