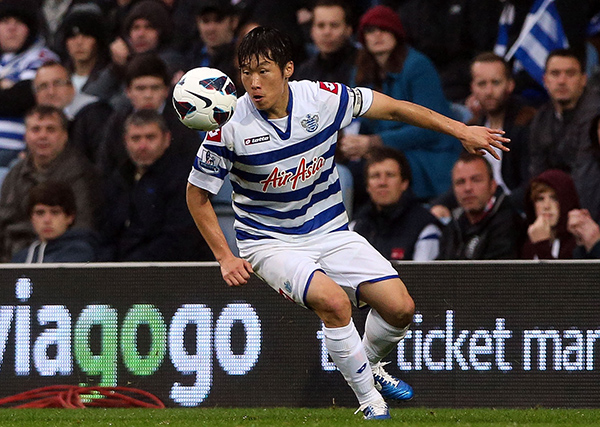 Queens Park Rangers captain Park Ji-sung of Korea controls the ball during an English Premier League match Sunday against Everton at Loftus Road in London. The game ended in a 1-1 draw.[PENTA PRESS/YONHAP]

LONDON - Queens Park Rangers forward Junior Hoilett scored a superb goal after an 80-meter (262-foot) run in only the second minute, but his team stayed winless at the bottom of the Premier League after a 1-1 draw with Everton at Loftus Road on Sunday.

The Tyne-Wear derby between Sunderland and Newcastle United at the Stadium of Light also finished in a 1-1 draw with both matches featuring an own goal and a sending off for the away side.

QPR raced into the lead against Everton when Hoilett, picking the ball up deep in his own half after an Everton corner, powered his way through the center of the field, holding off a challenge from Phil Neville before shooting.

The ball hit the heel of Leighton Baines and looped over the wrong-footed Everton goalkeeper Tim Howard, but Everton scored 30 minutes later when Sylvain Distin’s header hit a post and the back of goalkeeper Julio Cesar and trickled over the line, with the goalkeeper being credited with an own goal.

Everton was reduced to 10 men when Steven Pienaar was sent off for a second yellow card after 61 minutes that will keep him out of next week’s Merseyside derby against Liverpool.

QPR remained at the bottom behind Reading on goal difference with three points, the only other team without a win.

“I think it’s an important point, but ideally we would have preferred to have taken the maximum today because our performance warranted that,” QPR manager Mark Hughes told Sky Sports.

“Some of our play, especially in the first half was excellent.”

In Berlin, Hamburg Bundesliga’s mini-revival ended with a 1-0 home defeat by VfB Stuttgart on a dreary Bundesliga day which produced only one goal in two games on Sunday.

Struggling pair Nuremberg and Augsburg were involved in a scoreless draw in the other match, a result that kept both sides firmly entrenched near the bottom.

Hamburg had taken 10 points from its previous four games, but that run was ended by Vedad Ibisevic’s goal after half an hour. The Bosnia forward beat his marker to Martin Harnik’s low cross from the right and turned the ball past goalkeeper Rene Adler to break the deadlock with his fourth goal of the season.

Hamburg is 10th with 10 points from eight games, one ahead of Stuttgart, which is a point and two places below.

In Madrid, Atletico Madrid stretched its winning run to seven matches and kept pace with Barcelona at the top of La Liga when Radamel Falcao’s brilliant late free kick snatched a 1-0 win at Real Sociedad on Sunday.

With the rain lashing down in San Sebastian, Colombia striker Falcao had an unusually quiet night until he curled the ball over the wall and into the net for a 90th-minute winner, his ninth goal of the campaign.

Atletico, resurgent under Argentine coach Diego Simeone, has not won seven La Liga games in a row since the 1991-92 season. The victory put Atletico level at 22 points with Barca after eight matches but behind on goal difference.

In Milan, AS Roma, boasting one of the best attacking records in Serie A and also suffering one of the worst defenses, continued their wildly unpredictable season by storming back from two goals down to win 4-2 at Genoa on Sunday.

Antonio Cassano, overlooked by Italy since Euro 2012, scored his fifth goal of the season to help Inter Milan beat Catania 2-0 in a match featuring 13 Argentines among the 22 starters. Reuters