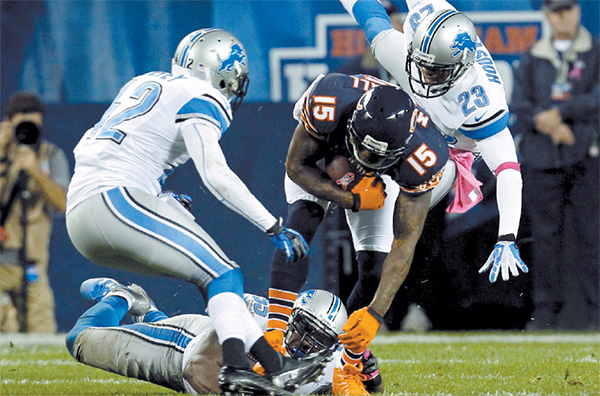 
CHICAGO - There was a big gasp going through the stadium as Jay Cutler writhed in pain on the field.

He rose to his feet and the Bears defense rose to the occasion.

Cutler returned after bruising his ribs, and Brian Urlacher made a key fumble recovery to help Chicago beat the Detroit Lions 13-7 on Monday night for its fourth straight win.

It was certainly not an easy night for the NFC North leaders, particularly their quarterback, but they came away with the win after a week off and possibly buried Detroit (2-4) in the process despite getting a major scare along the way.

That happened in the second quarter when Cutler was sacked by Ndamukong Suh and ultimately wound up going to the locker room to have his ribs examined.

“He’s a tough guy,” coach Lovie Smith said. “Most people thought Jay would get up. Unless it’s a broken leg or something like that, he’s going to get up. He is a tough guy. .?.?. That was a gutsy effort by him. He was in some pain, but he fought through it.”

Cutler came back to start the second half and was 16 of 31 with 150 yards and a touchdown in the game, and although he said he was feeling “all right” afterward, he acknowledged he wasn’t at full strength during the game.

“But we had to fight through it,” he added.

They did just that, and with the defense locking down the Lions, the Bears (5-1) prevailed. It was a huge blow for last-place Detroit, a team many expected to contend for the division championship after making the playoffs for the first time in more than a decade.

The Lions simply never got in gear, and when they had chances, they blew them, turning the ball over four times. The biggest came early in the third quarter, when Joique Bell fumbled at the goal line with the Bears leading 13-0.

Urlacher recovered and Chicago hung on from there, sending Detroit to its fourth loss in five games.