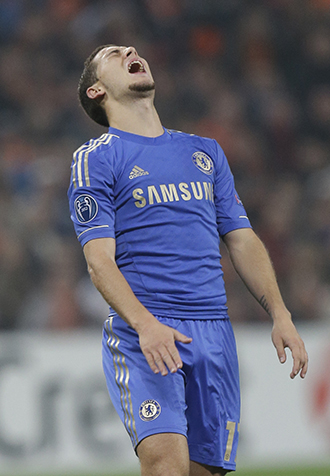 LONDON - Ukrainian side Shakhtar Donetsk led the way for the Champions League underdogs as it beat holders Chelsea 2-1 while former European champions Barcelona and Manchester United came from behind to maintain perfect starts on Tuesday.

Danish debutant FC Nordsjaelland was within nine minutes of a memorable win over Juventus before having to settle for a 1-1 draw while last season’s beaten finalists Bayern Munich bounced back from a shock defeat by BATE Borisov of Belarus to beat Lille 1-0 in France.

A year to the day since Chelsea captain John Terry racially insulted Anton Ferdinand of Queens Park Rangers, for which he is now serving a four-match domestic ban, he is eligible to play in Europe but could not stop Shakhtar from scoring after three minutes.

He failed to clear a pass to Alex Teixeira, who took advantage of poor defending to angle a shot past Chelsea’s Petr Cech who then made several fine saves to keep the score down.

Fernandinho doubled the home side’s lead after halftime before Oscar became the third Brazilian to score in the match with a late consolation for the well-beaten visitors.

“We are not afraid of playing against teams like Chelsea,” said Shakhtar’s Romanian coach Mircea Lucescu. “I think we deserved this victory - we created many more opportunities and the score could have been 4-1.

“Cech had an extraordinary game tonight. Maybe Chelsea started a bit too relaxed.”

Roberto Di Matteo, whose Chelsea side lost its first Champions League game since he became manager in March, said:

“Shakhtar have a good track record at home, particularly against the English teams.”

The result left the Ukrainian side at the top of Group E with seven points, three more than Chelsea. Juventus has three and Nordsjaelland one.

Unlike Chelsea, who failed to come back after falling behind, Barcelona, the European champion three times in the last seven seasons, did just that.

But Barca needed a goal in the fourth minute of stoppage time from Jordi Alba to beat Celtic 2-1.