Nongshim to recall noodles due to fears of carcinogen

Nongshim to recall noodles due to fears of carcinogen 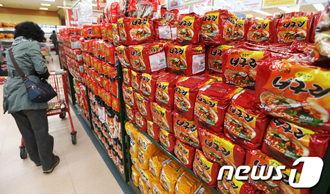 The state-run Korea Food and Drug Administration (KFDA) said yesterday it will order Nongshim, the nation’s No.1 instant noodle maker, to recall its six ramen brands including the hugely popular Neoguri ramen after a carcinogen was found in its ramen soup powder.

The decision has left consumers feeling understandably anxious as the KFDA initially decided that the amount of benzophenone detected was too small to be harmful to humans.

Benzophenone, which is produced during the process of cooking or manufacturing food at high temperatures, is known to cause some forms of cancer.

This represents a shift from the KFDA’s much more relaxed stance on Monday, when it said that the substance is generated naturally “during the smoking and heating process, and no standard has been set up to limit its amount in processed foods.”

However, as opposition party lawmakers stepped up their queries during a parliamentary inspection of public offices conducted by the Health and Welfare Committee under the National Assembly on Wednesday, Lee Hee-sung, chief of the KFDA, said the body will “recall ramen products that used improper raw materials after conducting an additional investigation.”

The KFDA said it randomly collected ramen products made by Nongshim in June and found a maximum of 4.47 parts per billion of benzophenone in six of them, namely, Spicy Neoguri, Mild Neoguri, Neoguri Cup Noodles (large and small), Saewootang Cup Noodles (large) and Seng Seng Udong.