Embattled Kaist president to step down from post in February

Embattled Kaist president to step down from post in February 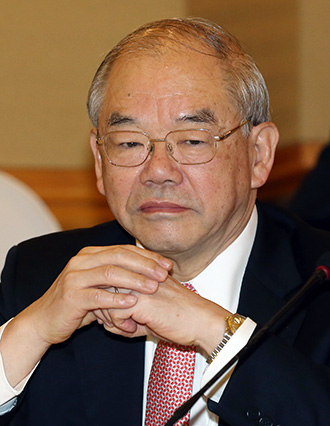 Suh Nam-pyo, the controversy-ridden president of the Korea Advanced Institute of Science and Technology, will step down from his post next February, a year and four months before his term is set to expire, said the school’s board of directors yesterday.

Following Suh’s announcement last week that he will voluntarily resign from his post next March, the Kaist board of directors in a meeting yesterday held at the JW Marriott Hotel in Seocho District, southern Seoul, agreed to accept the Kaist president’s letter of resignation on Feb. 23, the day after the Kaist graduation.

The board decided against a proposal to force Suh’s immediate resignation despite the Kaist faculty association advocating he step down right away.

Oh Myung, 72, the chairman of the Kaist board of directors, said after the four-hour meeting, “Suh resubmitted at the meeting today a handwritten letter of resignation asking to step down on the 23rd [of February], and the board of directors accepted it.”

At this point Suh hasn’t mentioned again his earlier demand that Oh resign along with him.

The board selected two members to the five-member president selection committee yesterday and stated that it will finalize a committee to select Suh’s successor by the end of next month, which will include members selected by the faculty, by the board chairman and the government.

Over the years, the 76-year-old Suh endured mounting pressure to resign as president of the school following controversial and highly criticized reform policies, accusations of patent theft and the suicide of students.

Last week, Suh stated at a press conference that he will voluntarily resign in March, after completing several ongoing international projects and also helping to scout a successor. After considerable friction, the Kaist board of directors and Suh in July came to a compromise enabling Suh to step down on his own terms.

Suh, first assuming his post in 2006 as president of the prestigious school, is serving his second consecutive four-year term which is slated to expire in July 2014.

The school’s association of professors however opposed the board’s decision to accept Suh’s resignation in February and demanded that he step down right away.

Along with implementing policies to chip away at students’ scholarships when their grades fell in an attempt to boost the school’s competitiveness, Suh also tightened up professors’ tenure policies and weed out professors who neglected their research work.

Five students and one professor committed suicide after the policies were implemented.

The professors’ association stated that “the board of directors is making a grave mistake.” The association expressed that should Suh remain in his post for nearly four more months, “there is a high chance he may use his position to extend his term again.”