The economy grew at the lowest rate of 0.2 percent in the third quarter, marking the slowest rate in three years, the Bank of Korea (BOK) said yesterday.

Analysts now say it may be difficult to achieve growth of 2.4 percent this year, the goal set by the central bank two weeks ago at its monetary policy meeting.

“There is some possibility that full-year growth may hover below the BOK’s 2012 estimate,” said Lee Sang-jae, a senior economist at Hyundai Securities. “Uncertainty surrounding a fiscal cliff in the U.S. will hinder a full-fledged recovery in the coming months.” 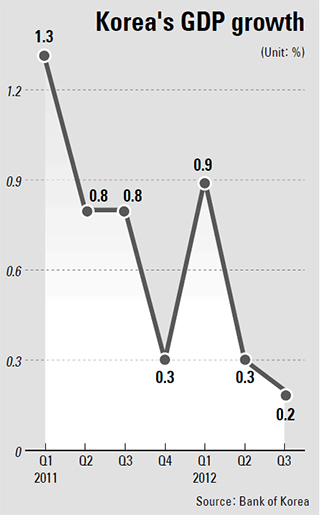 “There are more downside risks in the pipeline,” said Lee Joon-hyup, a researcher at Hyundai Economic Research Institute. “The so-called L-shaped recovery pattern, referring to a series of steep declines [in GDP, output and employment] followed by plateaus or slight growth, may persist for a longer period.”

Lee’s assessment is in line with BOK Gov. Kim Choong-soo’s latest remarks that “we are seeing a new paradigm where economic uncertainty has become a part of daily life.”

The central bank said GDP rose 0.2 percent in the July-September period from three months earlier. The figure stood at 0.3 percent in the second quarter.

The Q3 GDP marked the slowest rise since quarterly growth of 0.2 percent registered in the last three months of 2009.

Asia’s fourth-largest economy advanced 1.6 percent from a year earlier. It also marked the slowest on-year growth since a 1 percent gain in the third quarter of 2009. On-year growth in the second quarter stood at 2.3 percent.

The data came as the BOK made its second cut of the year on Oct. 11, when it slashed a quarter point off the rate to leave it at 2.75 percent in an effort to prop up the flagging economy. The central bank also cut its growth forecasts for 2012 and 2013 to 2.4 percent and 3.2 percent, respectively.

“A sluggish economic trend prevails,” Bahk said. “Consumption is relatively strong, but there are concerns that investment remains weak.”

Bahk said the economy had been sliding downhill until June but will likely see an upturn in the next few months in light of positive indications since September.

Meanwhile, the consumer sentiment index, also released yesterday, dipped one point to 98 in October from the previous month, indicating that consumers are still unwilling to spend.