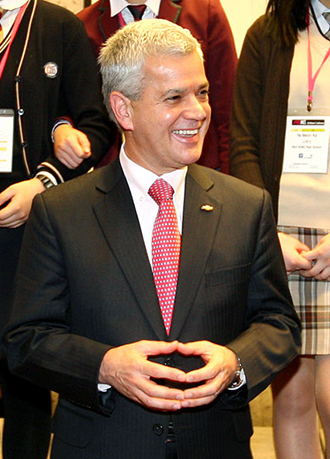 GM Korea President and CEO Sergio Rocha said yesterday the company plans to hire more women employees in Korea so that they will account for 25 percent of its total workforce by 2015.

“It’s not a favor, but the company’s obligation,” said Rocha at a press conference at the second annual GM Korea Women’s Conference, co-hosted by Kyobo Life.

“[Who gets hired or promoted] is not a matter of gender, but one of skills and capabilities,” he said.

Rocha said he will continue to invest in discovering female talent, although he understands the women employees have to play the roles of wife and mother as well.

“I think investing in women is the right thing to do and I don’t see this as a risk,” he said. “As we bring more women into a workforce, it will bring more balance and harmony.”

The Global Gender Gap Report published by the World Economic Forum ranked Korea 108 out of 135 countries in terms of gender equality.

He said ideas from women employee have helped forge the company’s strategy in the recent times because women often make final decisions on purchases in households.

He said about 65 percent of the time, women make the final decision on which car to buy.

“It’s quite common for husbands to call their wives, giving them lists of car options,” he said.

At the conference, Rocha wore a light pink shirt with a hot pink tie.

“In Brazil, where I’m from,” he explained, “wearing pink [indicates] that you recognize the value of women and respect them. My outfit today shows that giving equal opportunity to women is a journey, not a single point, and GM is fully committed to it.”

Exports contracted 8.7 percent to 53,470 cars. But domestic sales jumped 19.6 percent to 13,159 vehicles, due mainly to steady sales of the midsize sedan Malibu and Chevrolet Spark.