Toyota ships Venza from U.S. for its Asian debut

Toyota ships Venza from U.S. for its Asian debut 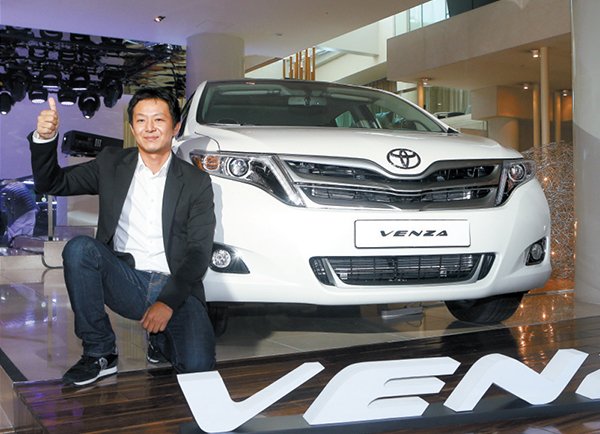 Chung Lee, a Korean-born designer at Toyota, poses with the Venza, a crossover utility vehicle, during a launch ceremony held at the W Seoul Walkerhill Hotel yesterday. This is the first time the model is being sold outside North America. [YONHAP]


The arrival of the Venza in Korea marks the third model Toyota has sent here from North America as the automaker continues to boost its lineup in the country, where the market for imported cars is steadily growing.

It follows in the tire tracks of the Sienna minivan and Camry sedan as Japan’s No. 1 carmaker sidesteps the negative impact of the high yen and takes advantage of the benefits offered by the Korea-U.S. free trade agreement, which went into effect earlier this year.

This is also the first time Japan’s No. 1 carmaker is releasing its crossover utility vehicle outside of the region in which it was built. The Venza, which was introduced in 2008 specifically for North American drivers, is entirely manufactured at Toyota’s plant in Kentucky and has been performing well in the U.S., where it sells 40,000 units a year on average.

“We thought that a vehicle which combines the automobile culture of America while also meeting the high standards demanded by Korean consumers should do well here,” Toyota Korea President Hisao Nakabayashi said at a launch event in Seoul yesterday.

“We’re trying to bring more stylish models here,” he added, citing the introduction of the Toyota 86.

The carmaker, which currently ranks fifth in the market for imported cars, has been enjoying a rebound after hitting the skids last year due to production shortages and other problems.

In the first nine months on 2012, Toyota sold 8,015 vehicles, more than double its sales a year ago. Its annual sales growth of 108.1 percent bests that of any other foreign auto brands here. However, demand has mostly focused on its Camry and Prius, a compact hybrid. The Camry accounted for over half of its sales in Korea from January to September, with 4,232 sold. The company also sells its RAV4, a compact SUV, in Korea.

Industry figures suspect the Venza will steal market share from Volkswagen’s Tiguan, the top-selling foreign SUV in Korea this year that has posted average monthly sales of 270 units.