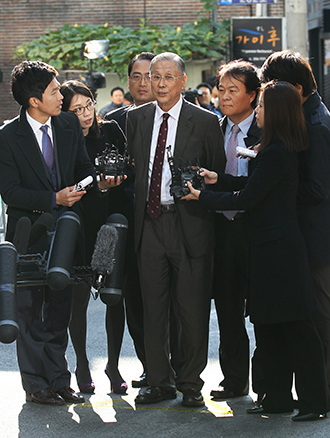 After delaying his summons date twice previously citing health reasons, Lee Sang-eun entered the counsel’s office in southern Seoul at 9:50 a.m. in his capacity as a key witness in the widening scandal involving the president and his family.

The scandal centers around allegations that President Lee’s oldest son, Lee Si-hyung, and the presidential security service used public funds and violated real estate laws when they jointly bought a plot of land last year for the retirement home, which was to be built in Naegok-dong on the southern edge of Seoul.

The cost was allegedly not shared evenly, with the security service paying too high a price for the site for security facilities in what opposition parties have claimed was a scheme to allow the son to profit from buying the site at a below-market price at the taxpayers’ expense. 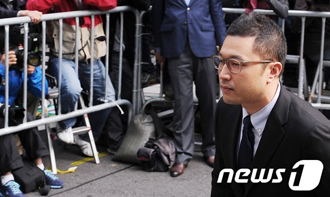 The 79-year-old brother and chairman of automotive seat maker DAS is suspected of having played a role by loaning some 600 million won ($542,000) in cash to his nephew, Lee Si-hyung, for the dubious land deal.

“I will talk inside,” the elder Lee told reporters before entering the independent prosecutor’s office, which was heavily guarded by security personnel from the presidential office Cheong Wa Dae and police officers. He was accompanied by security guards.

Asked whether he discussed with President Lee and the first lady in advance about lending the money, he again said, “I haven’t and will tell everything inside.”

Hundreds of reporters from both local and foreign media came to the scene to cover the scandal that is looming as a major political issue ahead of December’s presidential election.

The elder Lee, who previously underwent several heart surgeries, is currently being hospitalized at a Seoul hospital, according to his lawyer.

The special prosecution team headed by Lee Kwang-bum, a former judge, is expected to question Lee Sang-eun over why he lent the 600 million won in cash to his nephew, who currently works at DAS, instead of simply transferring the money to his bank account, the counsel said.

As part of the investigation, the counsel previously raided the home and office of the chairman in mid-October to secure the relevant proof and material, with the aim of verifying basic facts such as money flows and details of contracts.

During the raid, it was discovered that the chairman kept 600 million won in cash in his closet. DAS officials claimed the money was stored for business purposes.

The bulk of the money, which weighs almost 50 kilograms (110 pounds), was then delivered to Lee Si-hyung on Oct. 24, 2011, four days after the president’s son came to his uncle’s office with a promissory note, DAS officials said. The chairman allegedly told his nephew such a note was not necessary, but received the printed document as Si-hyung insisted.

Since the allegations were raised by the opposition parties, the presidential office has flatly rejected suspicions it was an illicit scheme to help the president’s son profit.

President Lee later scrapped the project and decided to move into his existing private house in Nonhyeon-dong in southern Seoul after leaving office next February.

In June this year, prosecutors wrapped up an inquiry into the scandal without filing charges against anyone involved, including the younger Lee, saying all suspicions in the case had been resolved.

Lee Sang-deuk, another elder brother of the president, is currently in prison for separate bribery charges.