Surreptitious world of the scalpers

Surreptitious world of the scalpers 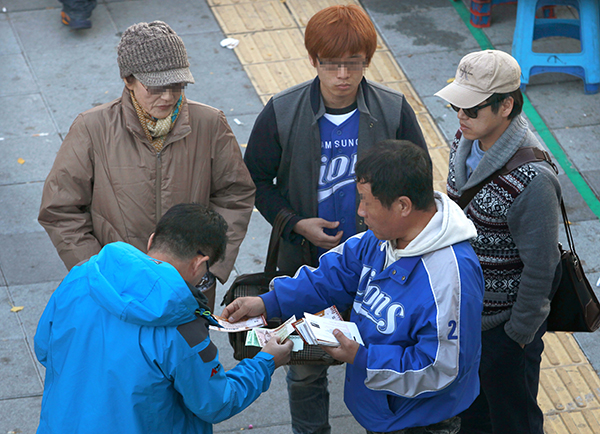 A scalper exchanges baseball tickets for cash yesterday in front of Jamsil Stadium in Songpa District, southern Seoul, before the sixth Korean Series match between the Samsung Lions and the SK Wyverns. By Park Sang-moon


It’s Game 1 of the first series of the 2012 KBO postseason, the Doosan Bears versus the Lotte Giants, and my date and I are wandering around the central ticket booth of Jamsil Stadium in Songpa District, southern Seoul, an hour before the game will begin.

Instead of a polite yeoboseyo, a man’s voice commands: “Come to the first base entrance now. And don’t end this call until I see you.”

When I’m near the gate, I inform the caller.

“Are you wearing a navy New York Yankees hat?” he asks. “Okay, get in the line of people waiting to get in.”

I get in line, and a man in his mid-50s joins from behind. “Two tickets in the red zone, right?” he asks.

“Okay, first I’ll bring you in the stadium, and then I’ll come back for your friend. I’m sorry for the inconvenience, but there are many eyes watching us.”

Baseball is by far the most popular professional sport in Korea. Since the Korea Baseball Organization opened in 1982, yearly attendance at games has gone from 1.43 million people in the first year to five million in 1995 and 7.15 million this year, the highest ever.

So popular are the games that sometimes you can’t get a ticket - unless you use the services of a scalper.

It isn’t that hard to get tickets for regular season games, but weekend games and contests featuring popular teams like the Lotte Giants, Doosan Bears, LG Twins and Kia Tigers, can be tricky. Postseason games, and particularly the Korean Series, which ends this week, are even tougher. And that’s prime season for the scalpers: men and women in their late 40s and 50s prone to wearing sun hats with visors and small bags on their waists to keep tickets and money. They usually show up about 3 p.m., an hour before the stadium distributes reserved tickets, and at Jamsil you find them near the central ticket booth right outside exit 6 of Sports Complex Station on line No. 2. If you drive to Jamsil, you’ll probably encounter a man or a woman in the parking lot wearing a bag on their waist saying, “Got tickets?” or “Seats in the yellow or red zone?”

Their trade is illegal. Every sporting event ticket in Korea must be sold through an authorized system such as Ticketlink or Interpark, the authorized Internet baseball ticket reservation system, or at official ticket booths of stadiums. Selling a ticket to another person, at a higher or even lower price than face value, is subject to a maximum fine of 200,000 won ($183), according to the Songpa Police Precinct in southern Seoul, which has Jamsil Stadium in its jurisdiction.

“There are 40 to 50 scalpers who regularly appear at Jamsil,” investigator Kim Yeong-deuk from the Songpa Police Precinct told the Korea JoongAng Daily. “We are not very sure how many scalpers are in the country but have estimated that there are 100 to 150.”

Tickets for KBO’s postseason games are exclusively sold on the Gmarket Web site and its ARS (phone reservation system), and through Ticketlink’s smartphone application. Theoretically, one person can purchase up to four tickets for postseason games. In practice, you have to be incredibly fast to get your hands on any ticket.

This year, tickets go on sale on Oct. 6 at 2 p.m. Minutes before, I open several browser pages on my computer screen and log into my Gmarket account. Then, I drum my fingers on my desk waiting.

At exactly 2 p.m., I click on a bar that reads, “Go to the 2012 baseball postseason ticket reservations.”

The next page, which shows the price of each zone’s seats and the ticket quantity option, appears smoothly. I calm down. Everything is working fine. I spend a few minutes choosing my seats, asking advice from my date over the phone. But when I try to move to the next step in the purchasing process, the screen freezes. The system is obviously overloaded.

I find out later that all the tickets were sold out by 2:43 p.m.

I am going to need a scalper.

I visit Jamsil to see how they work.

I meet a scalper surnamed Shim, 56, who has worked the trade for four years in two locations: Jamsil and Busan.

“When I just started, I asked my two children to reserve tickets,” he says. “For regular season tickets, each person can purchase eight tickets, so I was able to get more than 30 tickets if I used all accounts for my family.”

Shim’s ambition grew, and he rounded up five or six teenagers in his neighborhood, took them to an Internet cafe and asked them to reserve tickets. He ended up getting about 70 tickets per game.

“I pay 5,000 won to the teens at the completion of the online reservation,” Shim says, “and another 5,000 won when they pick up the tickets at a stadium before a game starts.” Scalpers generally target red and yellow zone seats as they have more seats and are popular with fans.

“The price is entirely up to the seller for games like postseason,” he says. “An average of 300,000 won of profit can be made from each game.”

“It’s very hard to root out scalpers,” says Park Sang-gwang, a police officer at Jamsil Stadium. “We have to catch them when the money transactions are being made.”

For postseason games, undercover police officers are using camcorders to film illegal purchases. The KBO hires additional security guards to monitor scalpers. I spot one small banner on a wall of Jamsil Stadium that reads, “Intensive control of illegal ticket purchasing is being implemented.”

On Oct. 23, the Dongrae Police Precinct in Busan arrested 35 scalpers, including a 52-year-old man surnamed Yoon, for illegally selling baseball tickets in Busan, Seoul, Daegu and Incheon during the 2012 season. The police said these scalpers have earned about 350 million won in total this season.

Waiting on line to get into the stadium with my scalper is one of the most awkward seven or eight minutes of my life.

“They [the staff at ticket barriers] never ask questions,” the scalper says. “But if they ask our relationship, just tell them I’m your uncle.” We get through with no trouble and he goes out again to get my date. When that mission is accomplished, the three of us retire to a quiet corner on the second floor of the stadium to settle accounts. I pay 100,000 won in cash for two tickets in the red zone. The normal price for a ticket for the same seat in the regular season is 70,000 won.

The scalper says he’s given us a good deal because he trusted me. “As people do not trust us for many reasons,” he says, “we also don’t trust strange customers because some are undercover police officers.”

I feel overcharged but not particularly guilty for breaking the rules. With my computer clumsiness, it was the only way to get a ticket.

“It’s much easier than the normal way,” my date says. “I see why people use scalpers.”