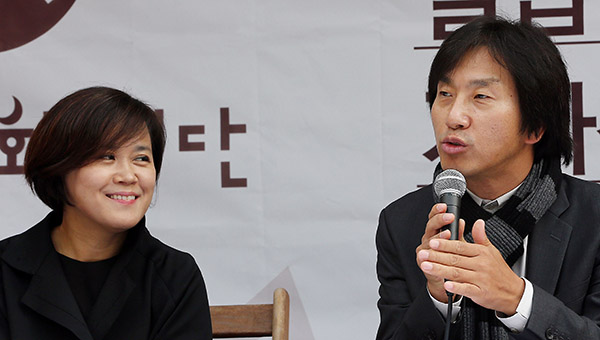 Shim Jae-myung (left) and Lee Eun, CEOs of Myung Films, talk about their plan to set up a film school during a press event at a cafe in Samcheong-dong, central Seoul, on Monday. [YONHAP]

The company’s CEOs, Shim Jae-myung and Lee Eun, who are married, announced the establishment of the Myung Films Cultural Foundation at a press interview in Samcheong-dong, central Seoul, on Monday. 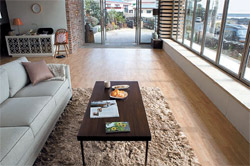 As it is the company’s first-ever launch of a cultural foundation, the duo invested a staggering sum of 3 billion won ($2.7 million) into the project.

“We chose to set up a film school to repay our fans who have watched and loved our movies,” Shim said.

“We want to raise our students to become distinguished directors like Yoon Sung-hyun, who made his debut with ‘Bleak Night,’ which was originally his graduate work.

“Director Park Jung-bum, who produced the award-winning movie ‘The Journals of Musan,’ is also our inspiration.”

Scheduled to open in February 2015, the boarding school for film students will be a two-year program with no admission fees.

Every year, 10 new freshmen will be chosen and will have a wide range of studies to choose from, including film studies, documentary making, production, acting, art, editing and sound engineering.

For the first year, students will be preparing their graduate projects, and during their second year, they will produce a movie of their own which will then be released to the public.